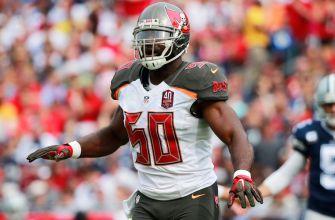 After re-signing Erin Henderson the Jets wasted little time by adding middle linebacker Bruce Carter to the mix. Carter has agreed to terms on a one-year deal believed to be around the veteran minimum. Carter joins David Harris and Erin Henderson at the middle linebacker position, and will be a candidate for sub packages. It will most likely be David Harris and Erin Henderson as the two starting middle linebackers in the Jets’ base 3-4 defense. Carter is more suited to be a third down rotational player as he excels in coverage. After being drafted 40th overall in 2011 by the Dallas Cowboys, there were high expectations for Carter. 2014 was a breakout season for Carter when he recorded 68 combined tackles, eight passes defended, five interceptions, and a sack. During last year’s off-season he signed with the Tampa Bay Buccaneers on a four-year $17 million contract, but underwhelmed and was released roughly a month ago. Through his five seasons in the league Carter has recorded 211 combined tackles, five sacks, five interceptions, 16 passes defended, and 19 run stuffs.

Five days ago the Jets officially announced the signing of defensive end Jarvis Jenkins. The agreement between Jenkins and the Jets was first reported nearly three weeks ago, but took a while to finalize due to the tight cap situation. The Jets and Jenkins agreed to a two-year deal worth $6 million. After officially adding Jenkins to the books the Jets are down to a measly $719,647 in cap space according to the NFLPA, the lowest in the league. Jenkins figures to be a backup defensive end who will fill Leger Douzable’s spot. Seen mainly as a run-stopper, Jenkins will most likely only be utilized in run-oriented packages. Last season Jenkins started 15 games for the Chicago Bears and recorded four sacks, with three-and-a-half of them coming in the first six games. Throughout the four seasons he’s played Jenkins has recorded 107 combined tackles, six sacks, six run stuffs, and a pass defended. After adding Jenkins and nose tackle Steve McLendon the Jets will likely make minimal, if any, additions to the defensive line.

Nearly a month into free agency, the Jets have signed or re-signed 10 players and lost seven to other teams. So far the Jets have signed: Matt Forte (RB), Steve McLendon (NT), Jarvis Jenkins (DE), Bilal Powell (RB), Khiry Robinson (RB), Erin Henderson (MLB), Bruce Carter (MLB), Darryl Morris (CB), Kellen Davis (TE), and Zach Sudfeld (TE). Former Jet free agents who have signed with another team include: Damon Harrison (NT), Chris Ivory (RB), Demario Davis (MLB), Jeremy Kerley (WR), Darrin Walls (CB), Antonio Allen (CB/S), and Stevan Ridley (RB). The biggest departure so far was undoubtedly Damon Harrison who signed with the New York Giants. The Jets signed Steve McLendon to replace Harrison, but Harrison’s ability to clog gaps and stop the run will be missed. After losing Ivory to the Jacksonville Jaguars, the Jets immediately signed Matt Forte to step in for Ivory. The signing of Forte has the potential to be an upgrade due to his ability to catch the ball out of the backfield.

The Jets will reconvene and begin their off-season program on April 18th. The Jets would like to have their quarterback situation resolved by then so they know who will be starting under center for OTA practices. The Jets and Ryan Fitzpatrick apparently aren’t any closer to a deal, leaving the Jets with Geno Smith and Bryce Petty as the only two quarterbacks on the roster. OTA practices are May 24-26, May 31st, June 1-2, and June 6-9. The mandatory minicamp is from June 14-16. The dates for training camp haven’t been announced yet, but it will most likely begin at the end of July and continue into the preseason. The draft is from April 28-30 in Chicago. The Jets have six picks in this year’s draft after giving up a seventh round pick that turned into a sixth rounder to the Houston Texans for Ryan Fitzpatrick.