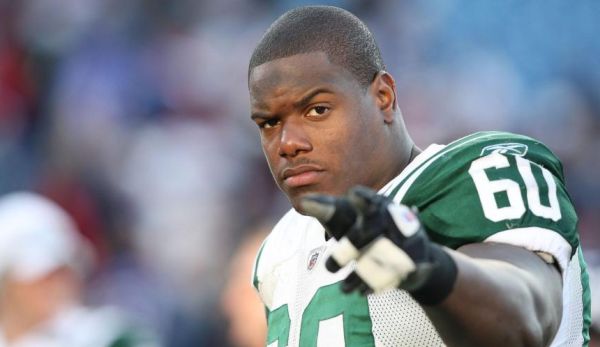 Brick Calls it a Career

After ten seasons in the NFL, all of them with the Jets, D’Brickashaw Ferguson has decided to step away from the game on his own terms. Since being drafted fourth overall in the 2006 NFL Draft by the Jets, Ferguson has never missed a game. Out of the 10,708 snaps the Jets have played since drafting Ferguson he’s played in 10,707 of them. The lone missed snap was due to a gadget play drawn up by former head coach Eric Mangini in which Darrelle Revis replaced Ferguson on the offensive line. Ferguson was as reliable of a player a team could hope for, not only did he never miss a snap or suffer an injury but he also stayed out of trouble and gave everything he had physically to the team. The quiet leadership that Ferguson provided will be difficult to replace. After noticing a slip in his performance, and being asked to take a pay cut Ferguson decided he would walk away with his pride intact and an impressive career behind him. Ferguson will undoubtedly be a shoo-in for the Jets’ Ring of Honor after his impressive iron man career and his professionalism. The Jets saved $9 million in cap space from Ferguson’s retirement. There’s a $5 million dead charge that the Jets will have to absorb from the $14 million total cap hit on Ferguson’s contract. After spending his entire career with the Jets, Ferguson wrote a heartfelt goodbye to his fans and the organization.

Thank you for the numerous messages of support. It has been a blessing to be apart of the NYJ. My letter to you pic.twitter.com/hcIRk41QtM

On the same day that D’Brickashaw Ferguson officially announced his retirement, news broke that the Jets had traded for Denver Broncos left tackle Ryan Clady. The Jets sent a fifth-round selection to the Broncos in exchange for Clady and a seventh-round selection. General manager Mike Maccagnan will be hoping the trade is as successful as the last time he brought in a player for a fifth-round pick (Brandon Marshall). After essentially executing a Clady-for-Ferguson swap the Jets will save about $3.1 million when everything is said and done. Clady agreed to restructure his contract to facilitate the trade. Clady’s new contract is a one-year deal with a base salary of $6 million with incentives to get up to $7.5 million. There is a team option on the deal as well, the Jets will have the option to bring Clady back after next year for a $10 million base salary with incentives up to $13 million if they choose to do so. Clady is 29, three years younger than Ferguson, and is a four-time Pro Bowler so the trade has the potential to be a great move. The one knock against Clady is his ability, or lack thereof, to stay healthy. Out of the last 48 games the Broncos have played Clady missed 30 of them due to foot and knee injuries. In 2013 Clady suffered a Lisfranc injury that landed him on injured reserve for the season. Last season Clady tore his ACL and watched the Broncos Super Bowl victory from the sidelines.

With Ryan Clady’s history of injury problems the Jets brought back a familiar face in Ben Ijalana. Ijalana will be insurance at the left tackle position if Clady goes down with an injury. For the past three seasons Ijalana has backed up D’Brickashaw Ferguson at left tackle, but has never played at the position. Ijalana has only played five snaps in three separate games from 2013 to 2015 and they were all at other positions on the offensive line. Ijalana is a former second-round pick of the Indianapolis Colts, with the Colts Ijalana only played four games and 34 snaps so his starting experience is limited. The Jets also signed former Oakland Raiders wide receiver/kick returner Jeremy Ross. Ross played 11 games last season, five with the Baltimore Ravens and six with the Raiders. Ross’ best chance to make the team is as a kick or punt returner, a position in which the Jets have been lacking. In four seasons Ross has 39 receptions for 469 yards and two touchdowns, and has a punt return for a touchdown and a kickoff return for a touchdown.

Brandon Marshall went to court for a civil trial, and received an award during the same day on Tuesday. Marshall was in court as a defendant in a case where he allegedly punched a woman in the face outside of a night club. The incident took place in 2012, and the supposed victim was Christin Myles, a former San Diego State basketball player. Myles was seeking an unspecified amount in damages from Marshall. Marshall remained adamant that he never struck Myles. The jury ruled in favor of Marshall with inconclusive evidence to prove he ever struck Myles. Marshall received a humanitarian award Tuesday night at a Manhattan gala. While at the gala Marshall was asked about current free agent quarterback Ryan Fitzpatrick. When asked whether or not Fitzpatrick will be on the team this coming season Marshall said “He better be.” Marshall also mentioned that he had talked to Todd Bowles who was a guest at the event, “I just talked to Coach, and Coach said we’ll be OK, so I assume we’ll be OK.” Marshall received the award for his foundation, Project 375, that raises awareness for mental health issues.