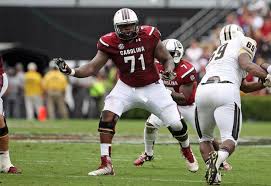 The Jets traded a 2017 4th round pick to the Washington Redskins, for the 158th pick in this year’s draft for Brandon Shell.

Shell’s evaluations may have been a little more glowing had he not faced Myles Garrett and Charles Harris. Those two players ate his lunch and exposed some flaws that will continue to get exposed at the next level. Shell’s hands widen too often in pass protection and defenders routinely get the first punch. He’s also far too quick to open his hips and let pass rushers get the edge on him. The good news is outside of those two games he was one of the cleanest pass protectors in the country.

The Jets have drafted yet another player that seems to be versatile.  Shell seems to be more natural at the right tackle position, but there is enough speculation that he can slide over to guard if need be.  Shell also had a SPARQ score of 78.3, which placed him 20th overall on the offensive line.  The Jets needed help on the offensive line, and they seemed to have picked a guy that can slide in at guard or right tackle, but might need some time to learn the ropes.  His high SPARQ score indicate elite potential based on physical ability, but it might take time to manifest.

Please follow the discussion on Brandon Shell, and all other prospects on our message board.  Click Here.