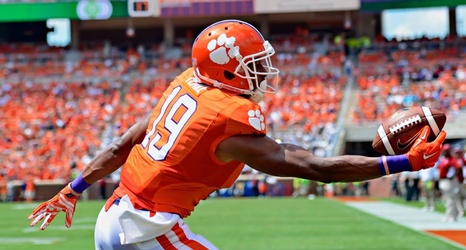 With their 7th & final draft selection of the #2016NFLDraft, the @nyjets take Clemson WR Charone Peake.

Possesses outstanding combination of size, length and deep speed. Looks the part of a WR1. Plays with consistent lean and acceleration into routes. Big athlete with some shake underneath to separate in tight quarters. Controlled strider after the catch with ability to hit top gear quickly on wide receiver screens and crossers. Is best when aggressively finishing catches against cornerbacks. Three-level potential as a pass catcher. Shows cornerbacks varied route speeds. Sells route at his top speed, but has another gear saved up to overtake defender when he hits the gas. Legitimate deep ball threat. Has potential to be dominant run blocker if he commits. Hard worker in the classroom and scouts love his personal character.

Hands are extremely small for his size and position. Late to get hands in catch­-ready position on intermediate throws. Dropped five passes for drop rate of 9.1 percent. Slows a bit on vertical routes when turning to find ball rather than maintaining top speed. Can improve working to open spaces against zone. Production never matched talent. Inconsistent in release success against press. Injuries are a major concern with two knee surgeries in his background.