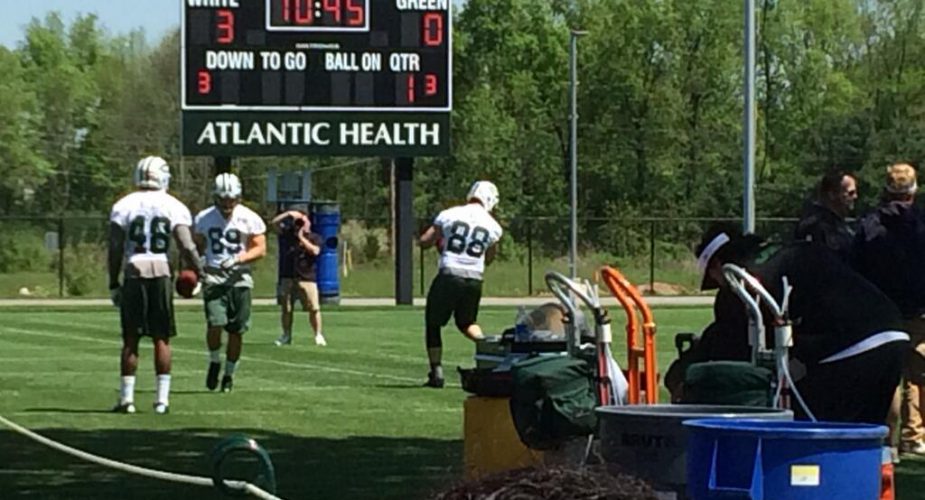 JetNation was back at Florham Park, Shane Sullivan covered the practice for us on Wednesday. Darrelle Revis didn’t take part in team periods. Zach Sudfeld and Bernard Pierce were both out and Dexter McDougle is still dealing with a hamstring injury.

Ladainian Tomlinson and Dennis Rodman were a few of the “celebrities” in attendance.

Ryan Fitzpatrick showed up with a new haircut, and the offense had a strong day. Jace Amaro stood out in particular.

Breno Giacomini was on the field in the rehab area as he works towards coming off of the PUP list.

With pressure coming, Fitz lobs it up deep to Powell. Made a nice catch for a 40 yard gain.

Geno finds Amaro for a nice over the middle, about 25-30 yards.

It was a good day for Fitzpatrick and Geno Smith, the same can’t be said for Bryce Petty who could be playing himself off of this roster.

Petty with a rough start. Fumbled a handoff on his first snap and overthrew wide receivers on tight coverage the following 2 plays.

You can’t judge the running game right now, we will learn more about them when the offensive line is healthy and they are playing for real in the preseason. But the defense won the battle on the ground on Wednesday.

#Jets running backs, without Forte, couldn't do anything on the ground in the team periods.

Bowles said he likes how the offense came out and started fast after yesterday's sluggish day.

Stay tuned as we will be back at #JetsCamp on Thursday.