The New York Jets have released their first “unofficial” depth chart. No real surprises on this depth chart, the QB rotation is Ryan Fitzpatrick, Geno Smith, Bryce Petty and Christian Hackenberg. That will change though once the preseason games reveal who the final three will be. It is highly unlikely that the Jets will use four roster spots on the quarterback position.

For the rest of the offense Kellen Davis is still listed as the starter at tight end. But if the #JetsCamp reports are any indication you can expect Jace Amaro to challenge for that spot. At right tackle Ben Ijalana is the starter but that will change once Breno  Giacomini returns from the PUP list.

The bottom of the wide receiver depth chart still needs to play itself out. Devin Smith is still on the PUP list and the team seems to be making some of the young wideouts earn their jobs before they move them up.

On defense rookie Jordan Jenkins from Georgia has the starting job at OLB. While fellow rookie Darron Lee is backing up Erin Henderson at ILB. With Lee’s speed you can expect to see him on the field in many situations, so we definitely wouldn’t worry about what the depth chart says.

The biggest question on defense remains the # 2 cornerback position. Who will start on the side of the field opposite of Darrelle Revis. Buster Skrine is listed as the # 2 but it is a passing league, so the Jets will have 3 cornerbacks on the field the majority of the time. Marcus Williams started camp as the favorite to win that spot but Dee Milliner is having a strong camp and if he proves that he can stay healthy we might finally see him in a starting role.

Here is the full depth chart, be sure to tell us what you think in our NY Jets message board. 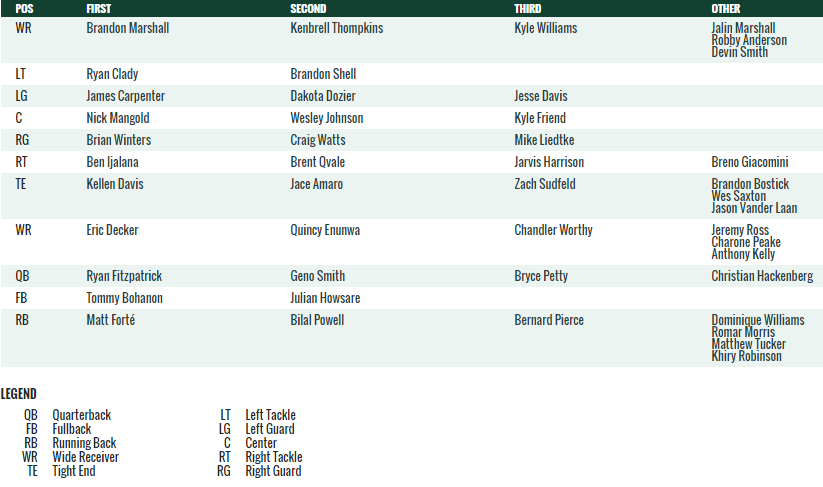