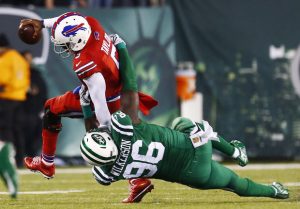 After a disappointing loss against the Cincinnati Bengals in Week 01 on Sunday, they opened the league Week 02 on Thursday night against division rival Buffalo Bills. It was a strange game, with the Jets dominating in many aspects but only winning by six points, 37-31.

After a week where stalling in the red zone cost made an easy win a crushing loss, it was a let down when an opening drive that featured two great catches by wide receiver Quincy Enunwa and three third and long conversions ended in a field goal. It bit them almost immediately when Buffalo quarterback Tyrod Taylor threw an 84 yard touchdown pass to wide receiver Marquise Goodwin.

After another drive stalled inside the 20 and ended in a field goal, the Jets came down the field to score a touchdown, but at a price. Wide receiver Brandon Marshall was pulled down by the facemask, caught his knee, and left the game. He returned from the locker room on the following drive.

The Jets defense, after Darrelle Revis was beat for the one touchdown, allowed the Buffalo offense very little. The Jets offense finally really clicked in second quarter, and on their fourth drive of the game, quarterback Ryan Fitzpatrick easily hit targets Enunwa, Marshall, and finally wide receiver Eric Decker for the touchdown.

The Jets didn’t allow any more point until the end of the half, when they allowed a field goal. The Bills were granted a generous spot on a fourth down attempt. New York led 20-10 at the half.

The Bills received the ball to start the second half and the Jets secondary burned them again, allowing a 71 yard touchdown to former Jet wideout Greg Salas. Rookie wide receiver Jalin Marshall fumbled on the ensuing possession, and the ball was run back for another Buffalo touchdown, and the Bill led 24-20.

The Jets looked like they were about to roar back with a big connection from Fitzpatrick to Decker, but it was called back for holding. The same play to Decker didn’t connect two plays later, and then Brandon Marshall dropped the ball on the next play. The Jets had to punt for the first time – in the mid third.

New York’s defense forced a Bills punt, and the Jets put together a 12 play, 84 yard touchdown drive, recapturing the lead 27-24. Enunwa left the field mid-drive, returned for one play, and left with difficulty breathing.

Jets cornerback Marcus Williams intercepted the ball and the Jets extended their league with another field goal by Nick Folk. They led 30-24 at the start of the fourth.

The Bills were driving to start the fourth quarter. At the New York 45, the Bills went for it on 4th and 1. The Jets defensive line, led by defensive end Sheldon Richardson in his first game back from suspension, wrapped up running back LeSean McCoy for no gain. Fitzpatrick then took the Jets down the field in five plays, with running back Matt Forte rushing for his third touchdown of the game. The Jets led 37-24.

With time running out, the Bills came down the field and took their first snap in the red zone with two minutes left. After a very skilled Buffalo touchdown by running back Mike Gillislee, the Jets recovered the onside kick to all but preserve the victory.

It was an impressive offensive performance for the Jets, who seem to rarely score more than 24 points. Ryan Fitzpatrick’s final line on the day was 24 of 34 for 374 yards with one touchdown, zero interceptions, and a 116.5 rating.

Matt Forte led all rushers with 30 carries for 100 yards with three touchdowns.

David Harris and Darron Lee led the Jets defense with five tackles each. After sacking Andy Dalton seven times on Sunday, the Jets pressured Taylor but recorded no sacks tonight. Marcus Williams had the game’s only interception.

After the short week, the Jets don’t play again until September 25th against the Chiefs in Kansas City. Kickoff is at 4:25.