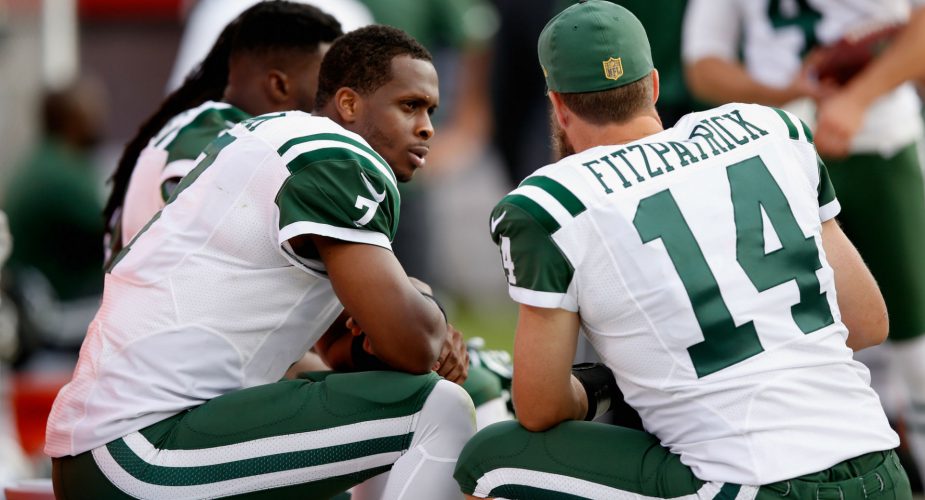 In a game with a series of bizarre twists, the New York Jets managed to convincingly defeat the Baltimore Ravens, 24-16, to improve to 2-5 on the season.

After starting the game with a relatively good defensive effort from the Jets, the offense managed a first down and would have had another, had wide receiver Charone Peake not dropped a relatively good pass. Punts should be pretty routine for the Jets at this point, but the Jets, who seem to be having one those truly disastrous seasons that they haven’t had in quite some time, -managed to come out of a punt down a touchdown when rookie punter Lachlan Edwards muffed a perfectly fine snap, picked it up, fumbled it again, and Baltimore recovered it in the endzone.

Baltimore added to their lead with a 50 yard punt before the Jets did anything worth mentioning. On 2nd and 18, Smith hit wide receiver Quincy Enunwa, who, on a simple route, managed to evade the defense for a 69 yard touchdown.

Baltimore kicked another field goal on their next drive, but the disaster came when the Jets had the ball. In a plot twist nobody saw coming, Smith was injured on a series ending sack, and went to the locker room.

So. It’s hard to believe, but the Ryan Fitzpatrick As Starting Quarterback era began continued in New York after taking a two quarter hiatus dating back to last week. In a surprising turn of events, Fitzpatrick went 4-4 on the drive, connecting with wide receiver Brandon Marshall for a big gain, and connecting with running back Matt Forte for the touchdown.

As is their custom, the Jets let the Ravens run though them like water through a sieve with 1:45 remaining in the half, so instead of leading at the half 14-13, they trailed 16-14 after easily allowing Baltimore into field goal range.

The teams traded possessions to start the second half until cornerback Buster Skrine intercepted Ravens quarterback Joe Flacco and ran the ball back to the Baltimore three yard line. In a maddening series, the Jets couldn’t get into the end zone from nine feet away and settled for a field goal, taking the lead 17-16.

On the very next drive, Flacco was intercepted again, this time by safety Marcus Gilchrist. The Jets offense was able to get inside the five again. There was a near disaster when Forte fumbled on third down near the goal line. Forte fumbled, the Ravens recovered, and then Brandon Marshall stripped the Ravens and recovered the ball, giving the Jets a new set of downs in the red zone.

The third time was the charm. Forte ran around the edge and into the endzone for the touchdown, the Jets extending their lead to 24-16 with 56 seconds left in the third quarter.

Things went rather routinely until most of the fourth quarter until the Jets had a chance to ice it late. Kicker Nick Folk had a field goal blocked by Baltimore defensive tackle Brandon Williams, so fans had to sweat it out a bit while the Jets defense, on top of a solid effort, held off the Ravens one more drive.

Matt Forte had a big day for the Jets against one of the league’s best running defenses, with 30 carries for 101 yards and 1 touchdown. Quincy Enunwa led Jets receivers with 2 receptions and 73 yards, followed by Forte, who had 4 receptions for 54 yards and another touchdown.

Defensive end Sheldon Richardson led the Jets defense with 8 tackles, including a sack. Linebacker Julian Stanford followed with 7 and Buster Skrine with 6. Skrine and Gilchrist had the 2 interceptions of Joe Flacco.

The Jets kickoff next Sunday in Cleveland against the Browns at 1:00 PM.