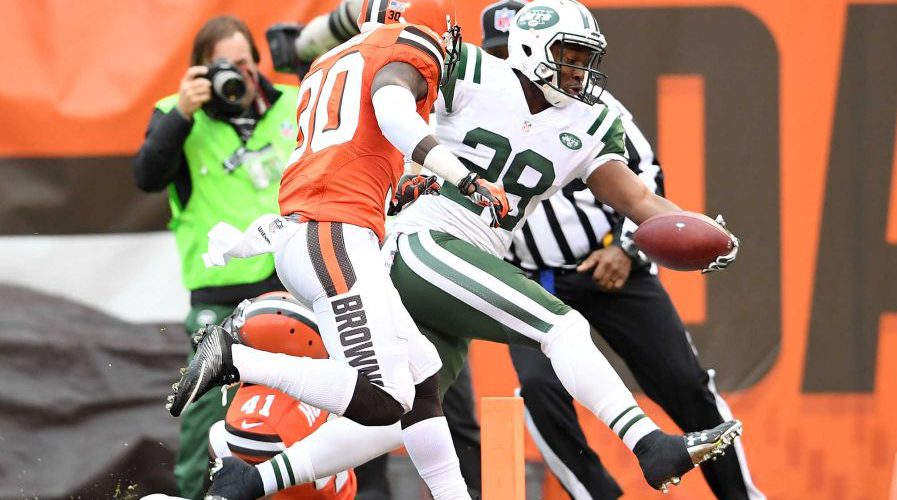 It took awhile, but the New York Jets got it together and remembered they were playing the Cleveland Browns in time to win their second football game in a row this week, 31-28.

Cleveland scored a touchdown on its first possession, easily, with the big play coming on a 32 yard gain on a connection between Browns quarterback Josh McCown and tight end Gary Barnidge.

The Browns had added to their lead with a field goal before the Jets even gained a first down, but after starter turned back up turned starter again quarterback Ryan Fitzpatrick got checked for a concussion after losing his helmet being hit rushing the ball.

The Jets finally got on the scoreboard in the second quarter when sparsely used running back Bilal Powell took a handoff from Fitzpatrick 35 yards to the end zone behind an excellent block from wide receiver Brandon Marshall, whose numbers have suffered since wide receiver Eric Decker hit the IR a couple weeks back.

The Browns figured out that the best way to gain yardage was to throw to wide receiver to Tyrelle Pryor, who was overmatching once elite cornerback Darrelle Revis on almost every down. They scored another touchdown near the end of the half, with Pryor gaining huge chunks of yards.

With 1:51 to go, the Jets managed to give the ball back to the Browns with a minute left, and the Jets defense, which was awful, allowed more points in less than a minute. Cleveland led 20-7 at the half.

Having chosen to defer at the start of the game, the Jets received the ball to start the second and scored on a drive that hinged on two big plays by wide receiver Quincy Enunwa. Early in the drive, he ripped a short Fitzpatrick throw out of the defenders arms, preventing a sure interception, and at the end, evaded the defense on a short catch for a 24 yard touchdown.

After holding the Browns off the board again, the Jets managed another touchdown on their next possession. After a bad spot from the ref and baffling time out from Todd Bowles (instead of challenging the spot), running back Matt Forte scored on 4th and 1, but the big play of the drive came again from Enunwa, who caught another pass and ran, this time for 57 yards.

In what can be described as a borderline miracle, the Jets scored another touchdown on their third possession of the second half.  They led 28-20 in the middle of the fourth quarter. The Browns, who by this time had clearly remembered they were the Browns, turned the ball over on their next possession when McCown threw a pass intended for Pryor that safety Marcus Gilchrist picked off.

They didn’t score on the ensuing possession, but they trapped the Browns on the punt at their own 1 yard line. After a would be first down catch was overturned on a challenge, McCown was picked off again when safety Calvin Pryor knocked a pass for running back Duke Johnson out of his hands and into the arms of diving  linebacker Lorenzo Mauldin. Per the CBS broadcast, it was the first interception by a Jets linebacker in 49 games.

The Jets kicked a field goal after running off some of the clock, and led 31-20 with 4:04 to play. The Jets, naturally, played soft defense and allowed a touchdown and a two point conversion on a drive where the Browns showed absolutely no urgency and chewed up almost the entire clock.

With 12 seconds remaining, the Brandon Marshall recovered the onside kick for the Jets, and the game was over.

It was a Jekyll and Hyde week for Ryan Fitzpatrick – Hyde in the first half and Jekyll in the second. His final line on the day was 16 of 34 for 228 yards with 1 touchdowns and 0 interceptions. Matt Forte led all rushers with 25 carries for 82 yards and 2 touchdowns. Bilal Powell followed with 6 carries for 76 yards and a touchdown.

Defensively, Darrelle Revis had a rough afternoon but led the team with 9 tackles. Defensive end Muhammad Wilkerson had the Jets only sack of McCown this afternoon. It was Wilkerson’s first sack since Week 01. Gilchrist and Mauldin had the interceptions.

The Jets take the field in Miami next week against the division rival Dolphins. Kickoff is at 1:00 PM.