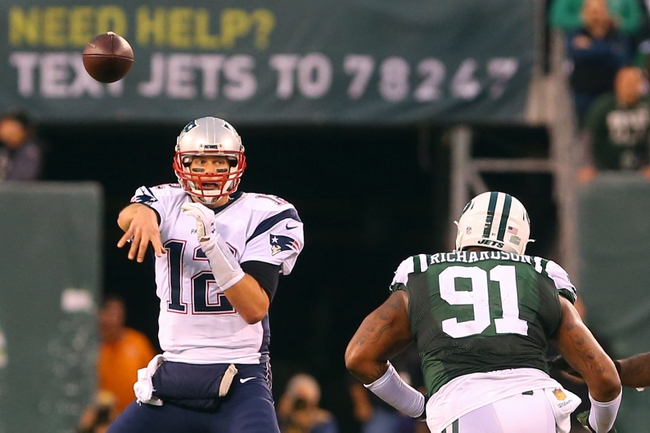 The Jets came out of the bye week and into the fire with a big game against division leading New England Patriots, and after a series of lead changes, ultimately lost the game 22-17.

The game, originally scheduled for 8:30 but flexed to 4:25, isn’t the marquee matchup it would have been if the Jets were better, but it was entertaining all the same.

In a first quarter that featured the Jets winning a challenge on spot, they took the lead on Nick Folk field goal. After an efficient drive that featured a 32 yard completion from quarterback Ryan Fitzpatrick to wide receiver Quincy Enunwa, the Jets nearly scored on a wildcat play, and then scored when Fitzpatrick connected with wide receiver Brandon Marshall in the back corner of the endzone.

The Jets led at the start of the second quarter, 10-0. The Patriots got 3 back on a field goal about 5 minutes into the second, but only after New England quarterback Tom Brady was knocked around and chased from the pocket that it was clear he wasn’t in a rhythm at that point. New England was greatly helped by a defensive pass interference call on cornerback Darryl Roberts, who failed to turn around and locate the ball.

The Jets drive after the field goal ended when wide receiver Robby Anderson, having the kind of up and down season typical of a rookie, fumbled the football at the 50 yard line after a 25 yard gain. Of course, this gave the Patriots the opening they needed to come right back down the field and score the game tying touchdown.

On the next drive, Nick Folk’s field goal attempt was blocked and recovered by New England. Naturally, New England came back down the field easily, but kicker Stephen Gostkowski’s kick missed a 39 yard field goal, pulling it wide left. The score was 10-10 at the half.

After trading possessions in the third, the Patriots took a 13-10 lead on a field goal after the New York defense made a stop in the red zone.

There were no changes in score until the fourth quarter. The Jets came down the field from their own 27. After missing Brandon Marshall in the endzone, Fitzpatrick connected with Enunwa again. Originally called an incomplete pass, the Jets second challenge of the game also went their way, as Enunwa’s butt landed in bounds before he hit they pylon and slid out. New York led 17-13 with 10:17 remaining in the game.

It went south from there. After the Patriots pulled to within in a point on another field goal, the Jets punted after four plays, and the Patriots came back down the field for an easy touchdown in the last three minutes. After converting on 4th and 4, Brady connected with wide receiver Malcolm Mitchell for the touchdown. The Patriots failed on the two point conversion, and led 22-17 with under two minutes to play.

The Jets had enough time to come back down the field, but Fitzpatrick fumbled and New England recovered the football. They ran a few plays and then Brady took a couple of knees, ending the game. Per the CBS broadcast, it was career win number 200 for Brady, moving him ahead of Brett Favre and tying him with Peyton Manning for wins.

Ryan Fitzpatrick’s final line on the day was 22 of 32 for 269 yards with two touchdowns, no interceptions and a 115.2 rating with one devastating fumble.

Running back Bilal Powell led Jets rushers with 8 carries for 36 yards. Quincy Enunwa led all receivers with five receptions for 109 yards. Brandon Marshall followed with six receptions for 67 yards. Enunwa and Marshall both had a touchdown reception.

On defense, linebackers David Harris and Darron Lee led the team with 11 tackles each. There were no sacks but defensive lineman Sheldon Richardson and Leonard Williams both hit Brady. Richardson hit him twice. Linebacker Lorenzo Mauldin also hit Brady without recording a sack.

With this loss, the Jets are officially eliminated from AFC East contention.

The Jets next appear on Monday Night Football on December 5th against the Colts and MetLife Stadium. Kickoff is at 8:30.