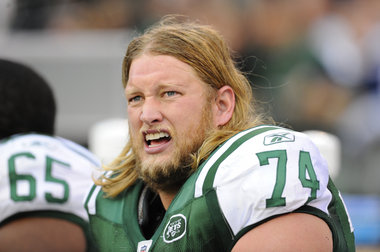 Tis the season for the New York Jets to embarrass themselves on Monday Night Football, crushed by the Colts, 41-10, falling to 3-9 and officially out of playoff contention.

The Jets finally slowed the Colts down, preventing another score on Indy’s third possession. That brought us to the end of the first quarter.

The Jets finally broke through with a field goal, after a third personal foul and a series of poor offensive play calls stalled another drive in the redzone. Colts led the game 14-3 with 10 minutes to go in the first half, and they got the field goal right back on the following drive, leading 17-3.

Indy scored again on their ensuing drive, and led at the half 24-3. Tight end Dwayne Allen caught all three first half touchdowns for the Colts from quarterback Andrew Luck. It’d have been worse if, after Ryan Fitzpatrick threw an interception, tight end Jack Doyle hadn’t fumbled at the goal line and safety Rontez Miles hadn’t recovered.

Indianapolis deferred in the first half, so received the ball to start the second half. They immediately went down the field for another touchdown, and led 31-3 with 8:54 remaining in the third.

It was so brutally awful up to that point that head coach Todd Bowles finally pulled Fitzpatrick in favor of backup quarterback Bryce Petty. His first drive didn’t end in any points either. Indy’s next drive did though. With less than two minutes to go in the third quarter, the Colts led 34-3.

Two plays into New York’s next possession, Petty did his best Fitzpatrick impersonation, throwing an interception that wasn’t a pick 6 but really could have been. Luck and the Colts made the Jets pay for it at the start of the fourth quarter. Running back Robert Turbin made quick work of the one yard to the endzone, and the Colts led 41-3.

In truly miraculous fashion, the Jets managed to score a touchdown. After several near turnovers and completely bad throws that made you wonder if Petty had ever seen the playbook, he managed to connect with wide receiver Robby Anderson for a 40 yard touchdown. It was 41-10 with 11:19 to go.

It was all over but the crying, mostly from the beginning. After the Colts pulled Luck, the score didn’t change again, and so Jets fans just had to ride it out until the end.

Marcus Gilchrist and Leonard Williams led the team with 8 tackles each. They were followed by Darron Lee, David Harris, and Muhammad Wilkerson, each with 7 tackles. Williams had the only sack of Andrew Luck.

With this loss, the Jets were officially eliminated from playoff contention for the sixth straight season, and so the countdown officially begins on 2017.

To run out the clock on 2016, the Jets still have to face 49ers, Dolphins, Patriots, and Bills. They visit San Francisco next week. Kickoff is at 4:05.

By Kristine Gammer
Posted on December 6, 2016