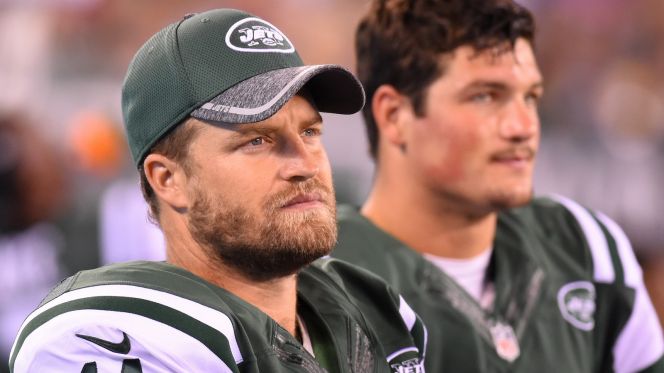 Whatever happened this afternoon, Jets fans could be comforted by the fact that they were not going to be embarrassed by Rex Ryan again, as Buffalo had fired their head coach earlier in the week.

Buffalo and New York, two average or worse division rivals, traded possessions until the second quarter, when the Jets drew first blood on a drive that featured a 51 yard hookup between somehow-still-starting quarterback Ryan Fitzpatrick and wide receiver Quincy Enunwa, who has emerged as a pleasant offensive weapon this season. Running back Bilal Powell caught the short touchdown pass from Fitzpatrick.

The teams went back to trading possession until about 2 minutes left in the half, when Buffalo got on the scoreboard with a field goal. The Jets led 10-3 at the half after coming down the field and getting into field goal range. Kicker Nick Folk came out for the kick with 2 seconds left and nailed it.

There was no further scoring until 4:03 to go in the third quarter, when Jalin Marshall dove to break the plane for another Jets touchdown. The jets led 17-3. It was confirmed by the officials on replay. The Jets originally recovered the ball on a Buffalo fumble, so the drive started at the Bills 13 and only took 3 plays to complete.

The Jets recovered the fumble the Bills committed on their next drive. While this drive also began in Buffalo territory, it ended in a field goal, and the Jets extended their lead to 20-3 as time expired in the third quarter.

The Bills turned the ball over again when quarterback EJ Manuel was intercepted by cornerback Darrelle Revis deep in Bills territory. The Jets scored a field goal off, extending the lead to 23-3. They scored again on the ensuing kickoff, when safety Doug Middleton jumped on the ball in the endzone that the Bills didn’t play. The lead became 30-3.

Buffalo made one last valiant effort for the endzone, helped greatly when Revis fell down and the Bills second quarterback of the day, Cardale Jones, completed a 64 yard pass to wide receiver Justin Hunter who was caught by safety Rontez Miles at the 1. It took three tries after that, but the Bills finally stuffed it into the endzone to make the score 30-10 with 39 seconds to go.

The Jets took a knee on the kickoff, and that wrapped 2016.

Ryan Fitzpatrick, in likely his final game as a Jet, had a decent afternoon. His final line on the day was 20/30 for 210 yards, 2 touchdowns, and no interceptions for a 109 rating. Bilal Powell led all rushers with 22 carries for 122 yards. Quincy Enunwa led all receivers with 5 receptions for 81 yards.

David Harris led the Jets defense with 8 tackles, followed by lineback Darron Lee with 7 and defensive end Sheldon Richardson with 6. Nose tackle Deon Simon, defensive end Muhammad Wilkerson, and linebacker Jordan Jenkins all had sacks for the Jets. Revis had the only interception.

See you in September.

By Kristine Gammer
Posted on January 1, 2017