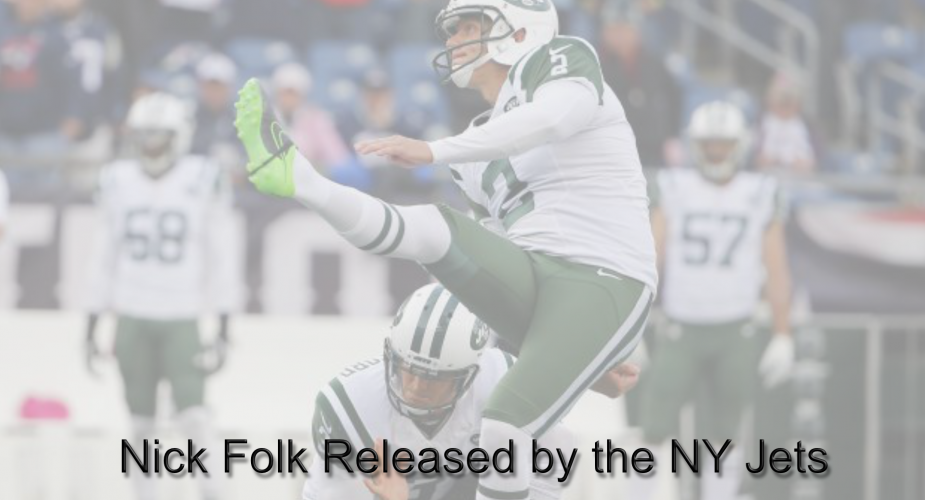 The NY Jets have announced that they have released kicker Nick Folk and RT Breno Giacomini. Chris Lopresti is reporting that these moves free up 7.5 million against the salary cap.

Nick Folk, who is 32, is entering his 11th year in the league. He spent the last 7 years with the Jets.

The Jets have released K Nick Folk, who ranks No. 2 on the franchise’s all-time points list with 729.

“It’s a sad day, but that’s the business side of things,” Folk said as he finished cleaning out his locker at the Atlantic Health Jets Training Center this afternoon. “I had a great seven years here. I think the only thing that would’ve topped it off would’e been a couple of Super Bowl wins.

“There’s been a great group of guys in this locker room from 2010 till now. I can’t thank Mike Tannenbaum, Rex [Ryan], John Idzik, Todd [Bowles] and Mike Maccagnan enough for keeping me around for seven years. This was our second home. It’s been a lot of fun and my wife and I have enjoyed every minute of it.”

Giacomini made 32 starts for the Jets his first two years with the team. He was hurt most of last year and only played in 5 games due to his back injury.

Folk and Giacomini both stand-up guys in the locker room. They will be missed in there. #nyj

Tell us what you think about these moves in our NY Jets forum.