Can Chad Hansen be the next Eric Decker ? 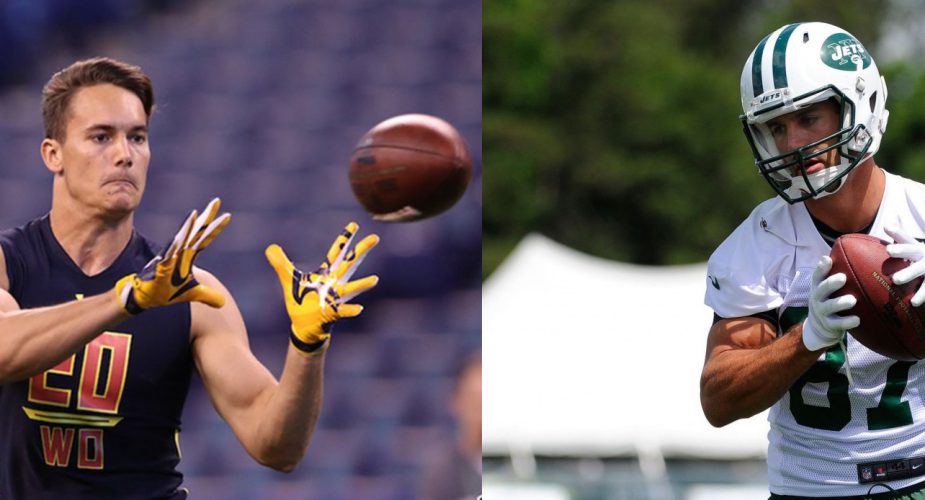 On the most recent episode of Jet Nation Radio, an intriguing topic came up by our hosts Glenn Naughton and Joe Blewett.  They spoke about our new rookie Chad Hansen and veteran wide receiver Eric Decker.  A caller spoke about Hansen being the Decker 2.0 carbon copy.

Can Chad Hansen be the next Eric Decker?

If Chad Hansen wants to improve his receiver skills, he should focus on Eric Decker like a hawk.  They are similar in stature and have familiar traits in playing style.  Both show soft hands and have a large catch radius, even on errant throws.  Both run block well, maintain high-field awareness, and show toughness catching the ball in the middle of the field.

Where Decker excels & what Hansen needs to mimic is the ability to work through press coverage off the line. Eric has exceptional hand fighting skills and uses his quickness in short areas to separate from cornerbacks.  His precise route running makes up for his lack of deep speed.

Coming into camp, Hansen has mostly been considered an outside vertical threat.  He creates separation with his long speed on the boundary.  He can come over the top and high point the football.  According to Pro Football Focus, Hansen was a perfect 16 out of 16 on catchable deep targets over 20 yards or more.  He tracks the deep ball well and can finish over the shoulder receptions with ease.

I do believe there is more to Chad then being a deep-ball threat.  His run blocking is impressive.  He delivers a nice punch and locks his arms into defenders.  In 2016, he totaled  92 receptions, 1249 yards and 11 TD’s which proves he can be utilized as the main target.  Chad is reliable in traffic on intermediate routes but sometimes lacks separation.  He can be a bit stiff when coming in and out of his breaks.  They will have to create scheme diverse plays to get him the ball quickly.  I can see them involving him in rub routes and the screen game.  Hansen has exceptional run after the catch ability on quick hits and screens.

With time, proper coaching, and Eric Decker as his mentor I think his potential to be an offensive weapon is promising.  It will be very intriguing to see how John Morton utilizes him in the new yet unknown offensive scheme.

To find out more about the hot topics by Joe & Glenn, check out our website and subscribe to our NY Jets podcast on iTunes and Google Play.