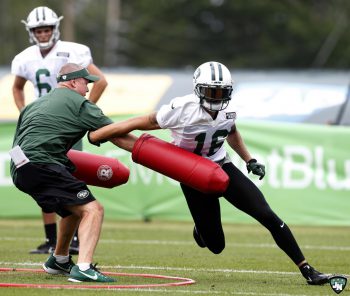 Day three of NY Jets training camp is here, KRL covered the practice for JetNation once again. Here is his #JetsCamp report for Monday, July 31st.

– Practice was open to the public for the first time.  Attendance seemed down but only slightly.

– The media attendance picked up I guess because Roger Goodell was at the facility.

– Penalty laps from the Mangini era returns when offensive players mess up.

– Ardarius Stewart and Chad Hansen returned fully to practice.  First impressions, Stewart early on was “double catching” balls until things started to slow down for him.  Hansen was being instructed by John Morton to not push off on comeback routes.  He needed to be more subtle when “disposing” of the CB’s.

– With the pads coming on there were 1 on 1 blocking drills:
* Darron Lee showed much stronger hands as he rocked back Bilal Powell
* Austin Seferian-Jenkins, Jordan Leggett and Eric Tomlinson were better than I expected.  Instead
of just getting in the way they actually were physical and moved people

– In 9 on 7 running drills the run defense was stout.  Credit to Deon Simon and the ILB’s (Lee & Demario Davis) for shutting down the middle.

– Morris Claiborne returned and continued to impress.  It’s shocking to say based on their careers but he’s going to be a huge upgrade over Revis if he stays on the field.

– Sheldon Richardson continued to impress with TFL’s in the running game.  Steve McLendon also had multiple TFL’s as he blew up running plays.

– Elijah McGuire flashed today with a couple of tough inside runs and a 40+ yard TD off an inside screen pass from Josh McCown.

– Concerning the kicking battle both Ross Martin & Chandler Catanzaro were perfect in their attempts. But I’m leaning toward Martin winning the battle because it appears he’s improved his leg strength. He’s been hitting 50+ yarders easily and on bad snaps he was still able to adjust and make the kicks.

– Josh McCown and Bryce Petty were both alright, nothing spectacular but no turnovers.  On one occasion it appeared that Petty was held on the sideline to allow Christian Hackenberg to stay on the field.

– Hackenberg “stacked” another practice as he continued to progress.  Areas of improvement today included:
1. On QB rollouts he was able to maintain accuracy even when his feet weren’t stationary
2. Throwing with anticipation to spots before receivers were there
3. Throwing through tight windows in the middle of the field

Padded Plays Of The Day

– Doug Middleton (S) “clothes-lined” Jordan Todman (RB) with one arm for a TFL.

Be sure to stop by our forums to read more about New York Jets training camp.