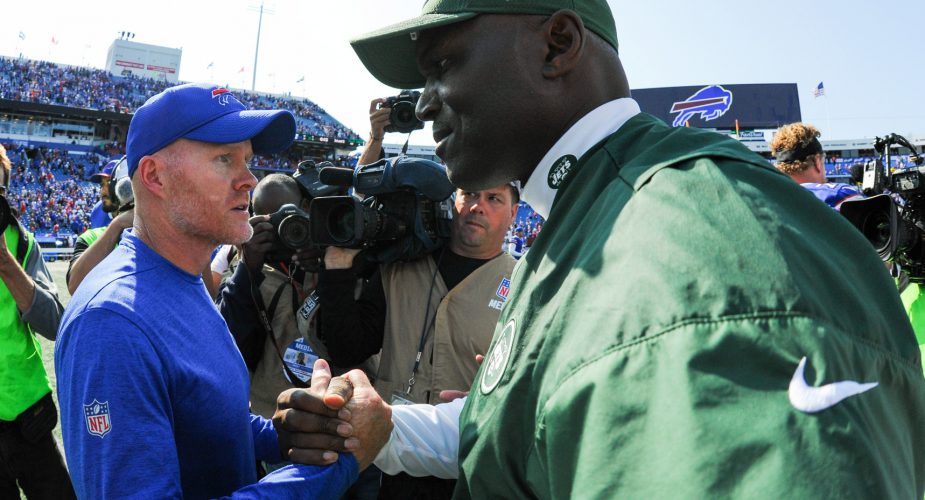 As any reasonable Jet fan knows wins are going to be hard to come by this season.  So progress has to be measured in other ways and in the first game of the season there were failures all over the place:

– Tood Bowles failed on multiple levels, his game management and defense to name a few.  If you’re going to be aggressive and go for the TD on 4th down and go for 2 pts in the third quarter, you can’t punt down two scores with time running out in the game!!!  In addition after three years of getting the personnel you want on defense, you can’t have the amount of mistakes in execution which allowed simple plays to become “chunk” plays.  Also, what happened to the secure tackling we saw in the pre-season???  There were whiffs all over the field

– The offense was a continuation of what was seen in camp and the pre-season.  There’s no OLine push in the run game which allows the defense to crowd the box and sit on every WR route.  With a compressed offense the only thing available is quick “dinks & dunks” which
don’t stretch the field.  This won’t change until the OLine generates push in the run game. As ineffective as they were the team was only down 14-12 in the 4th quarter.  The big culprit in this loss was the defense.

– An example of how stats don’t tell the story, Demario Davis & Darron Lee both had big games in the stat sheet.  But they may have played the worst interior LB game I’ve ever seen!!!  In run defense, zone pass defense and man to man pass defense all they did all game
was guess wrong, leave their lanes and allow simple plays to turn into disasters.  Don’t let anyone fool you they were the main culprits in giving up 200 yards on the ground.

– Unfortunate bad luck on the Juston Burris INT, he trips over his teammate (Marcus Maye?) at midfield which sends him to the ground.  If he doesn’t trip it’s probably a 105 yard pick 6 because there were no BUF players in front of him.

– Good games by Kony Ealy & Josh Martin at the OLB spots.  Both brought pressure and set good edges in the run game.

– On offense Jermaine Kearse & Will Tye made an impact after only a week.  Kearse with tough catches over the middle and Tye with physical running after the catch.

– Kalif Raymond needs to secure the ball better, but he did show a glimmer of hope that he can help in the return game with that 20+ yard punt return.

– Excellent leg strength by Chris Catanzaro on his FG’s and kickoffs.  And Lachlan Edwards except for that one shank was excellent in changing field position with his punts.

– Awful game by Matt Forte, I know there were no running lanes but you can’t drop two screen passes.

Tell us what you think about the New York Jets in our forums.