Five Most Valuable Football Teams in the World

The 5 most valuable football teams in the world are indeed worth a staggering amount of money. American football is a sport that is primarily popular within the United States. It doesn’t have that much of a following outside of the United States, in fact. As such, it is even more impressive that these teams are as astonishingly valuable as they are. America has a lot of dedicated sports fans, especially for sports that are perhaps distinctly American. 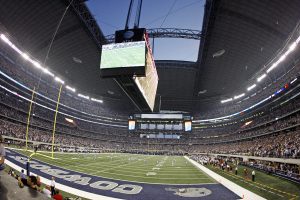 20 September 2009: Opening kickoff of the Dallas Cowboys during their 33-31 loss to the New York Giants at Cowboys Stadium in Arlington, Texas. Photo by James D. Smith

People might be surprised that the New England Patriots are actually second on the list of the most valuable NFL teams around today. New England people are not really known for being especially passionate football fans. Boston people actually are very passionate about sports, in fact, and having a lot of Boston fans is often enough when it comes to a team like the New England Patriots. They’re worth 3.4 billion dollars today.

The New England Patriots definitely had a bad period where they weren’t achieving a lot of success. However, they’ve been on a winning streak for a while, and it seems like a lot of their fans want it to continue. This is becoming a self-fulfilling prophecy, and the New England Patriots are now just behind the Dallas Cowboys with regards to success and value.

The controversially-named Washington Redskins are in the fifth place when it comes to the most valuable NFL teams. At 2.95 billion dollars, they’re just above the Los Angeles Rams. They’ve managed to become much more infamous than the Rams, of course, particularly outside of Washington. However, their infamy hasn’t stopped them from getting into the list of the top five most valuable NFL teams. NFL teams can be valuable even if they are controversial.