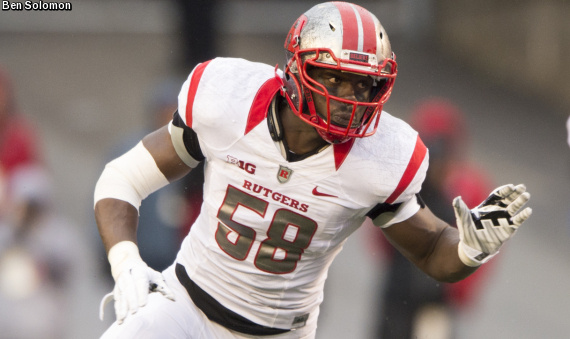 While plenty of players are brought in to meet with the team brass in the lead up to the draft, some names jump out more than others if you’re keeping track, and the Jets hosted a good one yesterday according to multiple sources.

Ruters edge rusher Kemoko Turay paid the Jets a visit and he’s undoubtedly a player the Jets should pounce on if he’s there when they’re picking in round three.

The Rutgers product has been projected as going anywhere from early/mid round two, to round four.  We projected him to Gang Green in our mock draft 2.0 based more on his traits than his production as he was moved around quite a bit by Rutgers and didn’t rush the passer nearly as much as he would have in some systems.

Here’s what NFL.com had to say about Turay:

Explosive edge defender with the coveted traits of an NFL pass rusher. Turay is still behind on feel and skill in that area and will need to develop a go-to move and a workable counter to beat NFL tackles. However, his ability to chase and tackle could translate right away. Turay splashed at Senior Bowl practices and certainly helped his cause to go on day two of the draft.

Just nine more days, Jets fans, and some of our questions finally start getting answered.