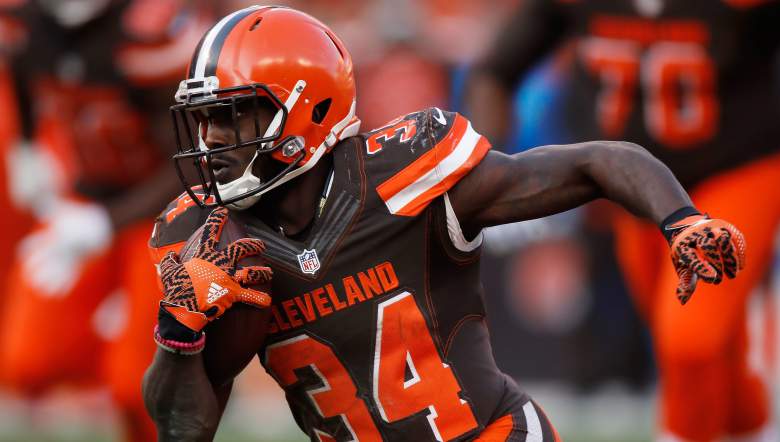 It’s been a long and winding road for running back Isaiah Crowell.  From the University of Georgia, to Alabama State, to the Cleveland Browns, the running back is now another piece of the Mike Maccagnan puzzle with the New York Jets after he was signed to a 3 year deal, worth $12 million earlier this off-season.

Since entering the league in 2014 with the Browns, Crowell has experienced very little team success as a member of four last-place teams that managed just 11 wins in four years.  Despite the poor team play, there was some individual success for Crowell during that time frame.

In 64 career games (45 starts), the bruising back rushed for 3,118 yards and 21 scores on 737 attempts, averaging 4.2 yards per carry. On the receiving end, Crowell wasn’t asked to do nearly as much, but showed himself to be a capable target out of the backfield, hauling in 96 balls for 770 yards and a touchdown.

Crowell has dealt with constant turmoil and a revolving door of quarterbacks and coaches as a pro.  Now, the Jets are hoping to provide the 25 year old with a little bit more stability than he has had in the previous four seasons. After signing with New York, Crowell told reporters, “I chose to sign with the New York Jets because I feel like it’s a great team, great atmosphere,” before adding, “I feel like it’s a good locker room, and I can win here.” Crowell is looking forward to the joining a team whose locker room is in transition as the Jets look to add young leaders, and many are excited to see how he’ll help Gang Green in the future.

With several options out of the backfield, Jets fans are wondering what Crowell can bring to the table this season.  Looking at last year’s numbers, the Jets were ranked 19th in rushing last season, with an group of backs that consisted of Matt Forte, Bilal Powell, and Elijah McGuire. Now Forte is gone, and it was Powell who led the Jets rushing attack with 772 yards on 178 attempts. McGuire also flashed at times, gaining 315 yards on 88 carries.  The addition of Crowell gives the Jets a hard-nosed runner who ran for 853 yards on 206 carries in 2017, a solid stat line given the anaemic production Cleveland got out of Deshone Kizer and Kevin Hogan at quarterback.

The Jets are now hopeful that with an upgraded offensive line, a vastly improved quarterback room and a supportive coaching staff led by Todd Bowles, Crowell can improve those numbers in the 2018 season in Green and White. Crowell came to the Jets to do one thing, and that is to win football games.  Is that something that will happen this year, next year, or at all?