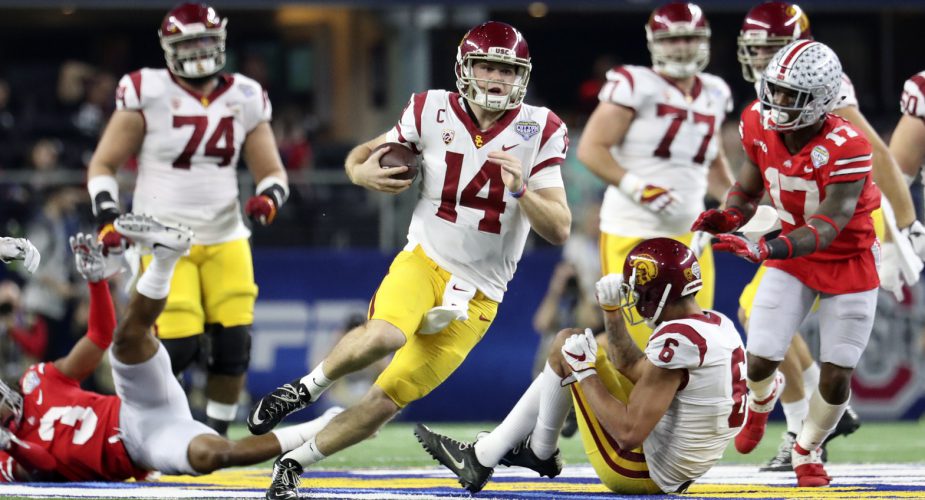 It’s one of those things that can’t be taught or coached, but you see it almost every time you take a moment to watch some of Sam Darnold’s college performances at USC.  Time and again, under pressure, Darnold rolls out, spins away or steps up in the pocket to avoid oncoming defenders, before making a beautiful throw for a big completion.  Often times the mechanics are off, but the result is a thing of beauty.

Now as a pro, albeit only in practice, it seems that so far Darnold isn’t having any problems continuing to display the same traits that made him such a hot commodity in college, with “so far” being the operative term.  After all, it’s only OTA’s and minicamp.

Sounds like a broken record, but Sam Darnold is so good throwing on the move. #Jets showcasing that with a number of designed rollouts and misdirection plays today.

Even still, any positive traits displayed by a young quarterback will be a welcome sight for any team who might be bringing a young signal caller along, but in Darnold’s case, his ability to make quality throws on the move is particularly important as the Jets transition to a new offense under Jeremy Bates, who is believed to have a heavy dose of zone blocking in his attack.

– The guy may not have Josh Allen arm, but he does have a cannon. Really impressed with the deep balls he threw today.

– SD seemed most comfortable throwing on the move, both with & against his body.

From left to right, the Jets offensive line is expected to consist of Kelvin Beachum, James Carpenter, Spencer Long, Brian Winters and Brandon Shell.  This O-line gets far more flack than they deserve from many fans, but realistically, they should be a middle-of-the-pack group.  However, there may be some bumps in the road as the new scheme takes form.

Even when things settle down, they won’t churn out a bunch of pro-bowlers, but we also shouldn’t see as many jailbreaks as we did last season when Wesley Johnson was at center and Brian Winters was playing with a torn abdominal muscle.  Carpenter’s “scheme fit” concerns have been discussed ad nauseum and he’s the wild card in the group.

Take a stroll through Jets twitter and you’ll find no shortage of fans insisting Darnold would “get killed” behind the Jets offensive line, but in all reality, his ability to get away from pressure should go a long way in helping him stay upright while making plays if things get ugly in pass protection.

Sam Darnold leads this draft class in terms of yards under pressure pic.twitter.com/t7OwBoIxnW

The presumption that the Jets offensive line is going to be among the worst in the league is what’s driving a lot of the fears we’re seeing and hearing from Jets fans, but a quarterback with plus-mobility behind what should be an average offensive line shouldn’t quite the recipe for disaster that some seem to think it is.

As we saw reported yesterday, offensive coordinator Jeremy Bates hasn’t ruled out the possibility of Darnold being the the starter when the season rolls around, and the number of reps he’s getting in practice suggests that could be the case.  If he is the starter, Darnold should be just fine physically, but the number one thing that could put him at risk is how quickly he reacts to what he’s seeing from opposing defenses.  Let’s just hope it’s not with the same fear and trepidation that some fans are showing as the positive reports of Darnold’s progress continue to roll in.