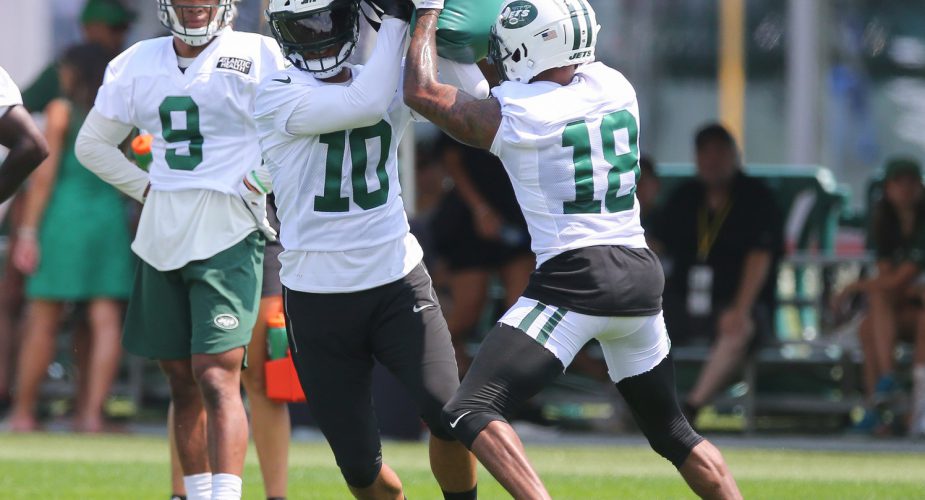 The final practice with no pads and the first with a crowd (season ticket holders) let’s take a look at what happened:

– Practice ran for 2 hours and 40 minutes

– Brant Boyer (STC) “held class” as he went over the new KO rules that will be implemented this year:
* No wedges
* No running start for players in coverage
* Balanced formations (5 players on either side of the K)

– The penalties were reduced for the majority of practice but increased dramatically in the final 30 minutes.  Players were tired, but coaches got on them to fight through because penalties at the end of games “get you beat”

– An absolutely “beastly” performance by Nathan Shepherd as he was unblockable.  He had at minimum 5 TFL’s and pressed the pocket with bull rushes & swim moves.  In 1 on 1 drills he put a devastating swim move on James Carpenter which had him grasping at air.  It was an “anti-Wilkerson” performance it’ll be interesting to see him in pads

– Darron Lee had a good day with a near INT on a slant in a red zone period (dropped).  Good pressure up the middle on blitzes and improved coverage in space during 7 on 7’s

– Derrick Jones the converted CB, impressed with two INT’s.  Both were against Josh McCown, one was a diving pick during red zone and the other was during 7 on 7 where he jumped a route over the middle of the field

– I watched Antonio Garcia the LT we picked up from NE, he has a frame similar to Brick when he first broke in.  He needs to improve his strength but he showed good awareness in picking up delayed blitzes

– OLinemen who impressed during 1 on 1 drills were Dakota Dozier and Brandon Shell who were stoning people.  Spencer Long continued to impress with his ability to re-anchor his feet and regain his balance if a DLineman gets underneath him.  He’s not Mangold but if he stays healthy he’ll be a tremendous upgrade over Wesley Johnson

– Foley Fatukasi showed up in run defense as he generated at least two TFL’s.  He’s not as advanced in rushing the QB but let’s see how he develops

– Teddy Bridgewater was much sharper in his ball placement and accuracy today and the one big difference was he wore his trademark gloves.  On Friday he went barehanded and after seeing his performance today he shouldn’t do that anymore

– Obum Gwachum an OLB, he had a “sack” on Friday and continued to bring edge pressure today with another “sack”.  Let’s see what he does when the pads come on, he has a long/lean frame similar to Jason Taylor

– Shaneil Jenkins the DE we picked up today.  In his first practice he had a couple of TFL’s in run support and showed some pass rushing promise in 1 on 1 drills

– Let’s see the running game by the offense bounce back on Sunday.  On Friday they got what they wanted but today the defense responded

Here is the discussion thread from our forums about KRL’s Camp Notes.