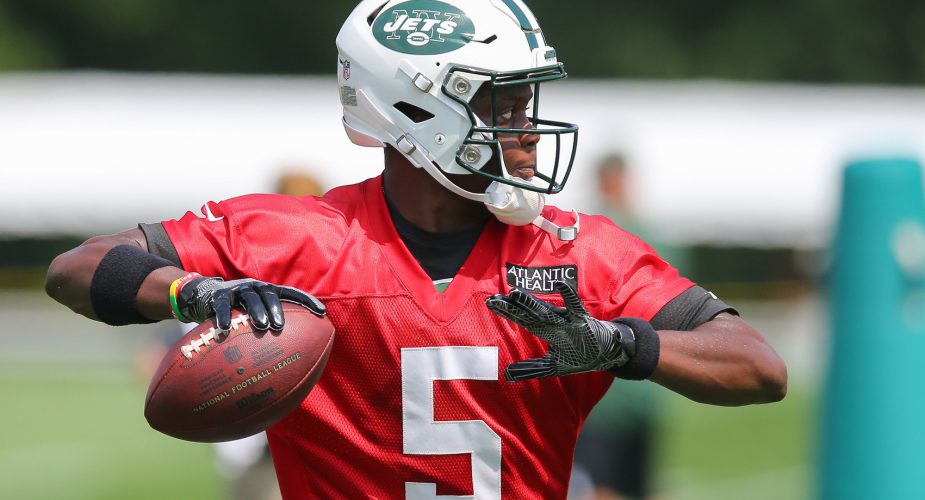 – Because Sam Darnold hasn’t signed yet some fans decided not to come, it was less than a “sell out”

– There are no bikes this year so you have to search to find the players not practicing. Today Marcus Maye, Xavier Cooper (DL) and Brandon Bryant (S) sat out

– The competition at K between Cairo Santos and Taylor Bertolet remains even in my eyes. But Bertolet’s leg seems stronger because his kicks go through the uprights much higher than Santos

– Strong practice for the ILB tandem of Darron Lee and Avery Williamson.  Williamson continued his strong play but it was Lee who surprised.  He showed strong & violent hands in 1 on 1 blocking drills and was able to take on and shed blocks as he had TFL’s during team periods

– Dimitri Flowers (FB) needs to improve his blocking if he’s going to win the spot over Lawrence Thomas.  He got exposed during 1 on 1 blocking drills

– Rashard Robinson (CB) makes way too many mistakes in his assignments.  He seems to be out of position a lot

– Trumaine Johnson has the ability to diagnose and run the route before the WR does.  Seems like he was always between the QB & WR before the ball was released

– Obum Gwachum (OLB) showed variety in his game as he was strong in run support and shared a TFL with Shepherd.  It will be interesting to see if he shows up in games because he has a prototypical OLB frame

– Strong day for the TE’s Eric Tomlinson, Chris Herndon & Neal Sterling.  With the pads on Tomlinson was able to display his blocking ability and his hands are extremely reliable. Herndon & Sterling made tough catches over the middle all day and both had TD’s during a red zone period

– Trenton Cannon had another strong practice as he displayed his speed. But more importantly he doesn’t shy away from running up the middle like some “speed guys” do.  He had a TD on a shifty inside run during a red zone period

– Josh McCown was sharp as he had good chemistry with the TE’s mentioned earlier.  And he finished practice threading the needle to Sterling for a TD during a situational period. The offense was down 16-10 with 9 seconds left from the 10 yard line

– Teddy Bridgewater was average as he struggled making connections with receivers during various periods.  He did have a good end to practice like McCown during the situational period.  He made a pinpoint throw to Tre McBride (WR) on corner route against double coverage for a TD

– Parry Nickerson (CB), he has an incredible nose for the ball as it always seems to find him. Now he needs to pick those throws off because he should have 3-4 INT’s

– Trenton Cannon
Be sure to check out the JN forums for more updates on NY Jets training camp.