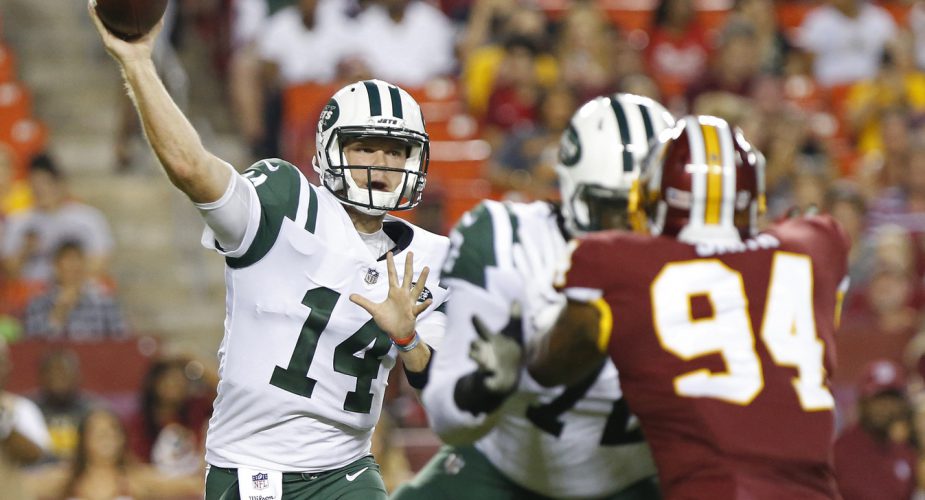 Here are some quick thought on the NY Jets preseason game vs the Washington Redskins.

-Sluggish effort in all phases as it seemed a week of travel, practices and fights carried over to the game.

– A very soft defensive effort which allowed too many yards.  The good thing was they were able to tighten up in the red zone and only give up FG’s.

– There was no pressure from the standard pass rush and Bowles didn’t seem to dial up many/any blitzes.  The run defense was ok but there were mistakes that allowed a couple of big runs (Darron Lee got washed out on one big gainer).

– The tackling was nowhere near as clean as the ATL game and there were way too many personal fouls.  Frankie Luvu has to clean up his technique, he brings the kind of effort you want in applying pressure but you can’t give up multiple personal fouls.

– Offensively Bates worked around a banged up OLine and tried not to expose them and the QB’s by keeping the passing game short & quick.  They allowed pressure though as WSH got Jonotthan Harrison to whiff on one sack and forced Sam Darnold into another sack due to coverage.  There was no consistent movement in the run game, the starters need to get healthy and back into the lineup.

– Sam Darnold impressed me more in this game than the ATL one.  He struggled in his first drive with a three and out then recovered in his next two to move the ball into scoring territory. In addition playing behind a makeshift OLine with pressure coming, he never seemed rattled. He made good decisions with the ball and even the INT wasn’t a bad play.  On 4th down I want my QB taking a shot at extending the drive rather than throwing the ball out of bounds as one analyst suggested.  They do realize that if you don’t get the first down the ball is being “turned over” anyway?  Darnold also improved getting the team in and out of the huddle as he was able to get to the line with 12-15 seconds left on the clock.

– Teddy Bridgewater played well and hopefully continues to increase his value.  Considering the pressure he was under he showed good mobility in the pocket and his usual accuracy. Bridgewater’s INT was bad because WSH CB had the vertical route covered he should have thrown a back shoulder.

You can discuss this topic in our NY Jets forum.