The NY Jets announced the roster moves needed to get to the 53 man limit today. Charone Peake made the cut at wide receiver over both Chad Hansen and Tre McBride. McBride had a strong camp, but Peake’s value on special teams was most likely the deciding factor. There are currently six wide receivers on the roster and special teams also played a factor in keeping Andre Roberts because he can return punts.

Glenn Naughton broke down some of the earlier roster cuts and he mentioned that Jason Myers won the kicking job. If you are auditioning and you make a 58 yard field goal, you make it really hard for the team to cut you.

At outside linebacker Lorenzo Mauldin and Dylan Donahue were both waived. Donahue had off the field problems and he never showed enough on the field to earn a roster spot.

Deon Simon was waived which means that Leonard Williams is the only player left on the roster from the 2015 draft.

Rontez Miles was placed on the Reserve/Physically Unable to Perform list. He is eligible to return to the active roster after six games.

There are seven cornerbacks on the roster, Derrick Jones and Juston Burris both made the team.

There is an interesting mix at running back and tight end. Four tight ends made the team (Chris Herndon, Jordan Leggett, Eric Tomlinson and Neal Sterling). There are four running backs on the roster (Trenton Cannon, Isaiah Crowell, Bilal Powell, Elijah McGuire) and one fullback (Lawrence Thomas). McGuire is coming back from a broken foot, so he is expected to be inactive the first few weeks of the season.

The Jets are technically three players over the roster limit, but they have exemptions for NFL suspensions:

Here is the list of moves the Jets made to get to the 53 man limit. Courtesy of NYJets.com. 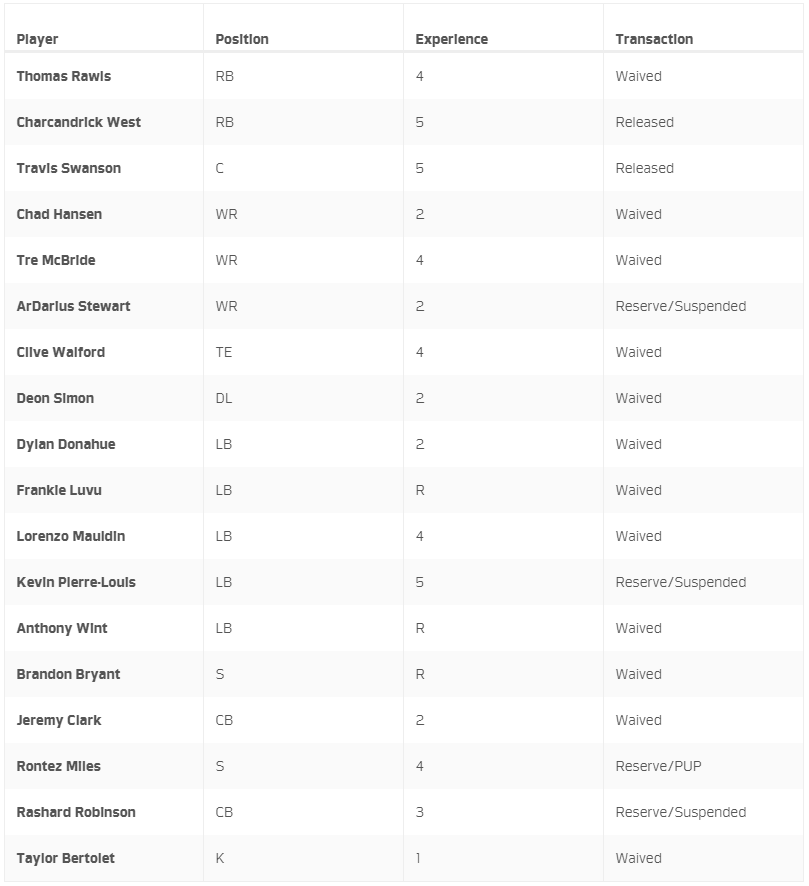 By Phil Sullivan
Posted on September 1, 2018