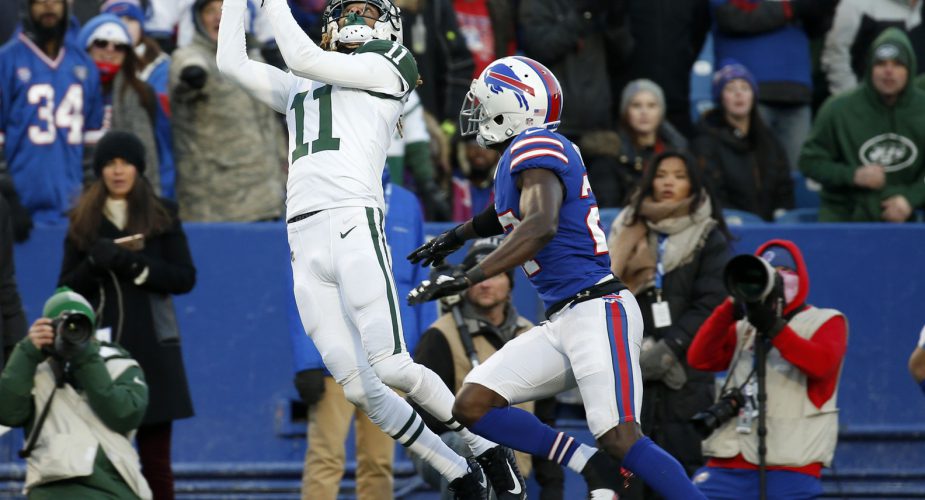 Here are some post game player notes courtesy of the NY Jets.

Early In the fourth quarter down 13-20, QB Sam Darnold connected with WR Robby Anderson on a seven-yard pass to tie the game at 20-20. The touchdown marks Anderson’s fourth touchdown of the season and the 12th touchdown for the rookie quarterback this year, his first since Week Eight after missing the last three games due to injury.

With 2:31 left in the game, Darnold led a 61-yard drive capped off by a one-yard touchdown run by RB Elijah McGuire to take a 27-23 lead over BUF. The touchdown was the first of the year for McGuire after missing the first eight games due to injury. On the drive, Darnold completed 3-of-5 passes for 43 yards, including a 37-yard pass to WR Robby Anderson to put the Jets at the BUF five-yard line and set up the game-winning touchdown.

Trailing by three and facing fourth-and-goal from the BUF 1, the Jets opted against the game-tying field goal attempt and scored after RB Elijah McGuire found the end zone. The score marked the first game-winning touchdown for the Jets on fourth down in the last two minutes of the fourth quarter since 1998 when QB Vinny Testaverde ran one in from five yards out with 0:27 seconds remaining vs. SEA (12/06/98) for the 32-21 win.

In the first quarter, LB Kevin Pierre-Louis poked the ball loose from QB Josh Allen, marking the first forced fumble of his career.  The loose ball was then recovered by S Jamal Adams and returned five yards. The fumble recovery was the third of Adams’ career and his first this season.

Late in the second, CB Trumaine Johnson picked off QB Josh Allen, recording his third interception of the season. Johnson would then seal the game with his interception of Allen with 0:59 second remaining in the fourth quarter.

S Jamal Adams finished the game with 11 tackles, bringing his season total to 88 tackles (According to Radar360). Adams now ranks third in tackles among safeties in the NFL. He also added one sack, one forced fumble and one quarterback hit in the contest. For the season, Adams has recorded 2.5 sacks, three forced fumbles, 12 passes defensed, one interception, eight tackles for loss and five quarterback hits.

With 0:04 seconds left in the first half, DL Henry Anderson prevented a score, blocking a Stephen Hauschka field goal. Anderson has now blocked kicks in consecutive weeks after blocking an extra point last week at TEN (12/2). The last time a Jet blocked a kick in consecutive games was in 1997, when S Corwin Brown blocked a punt at NE (09/14/97) and a field goal the next week against OAK (09/21/97).

WR Robby Anderson, who finished the game with a team-high four receptions for 76 yards provided key plays on a pair of fourth-quarter touchdown drives. On the Jets 11-play, 85-yard drive that opened the quarter, Anderson pulled in his team-leading fourth touchdown catch after he was found by a scrambling Sam Darnold for a seven-yard catch. On the game-winning drive, Anderson hauled in a 37-yard pass to set the team up with first and goal from the five.

LB Neville Hewitt made his first start since 2016. He entered the game as the Jets leading special teams tackler (11), but made a big impact on defense, recording seven tackles (second-most of the team), one half-sack and a quarterback hit in the contest.

CB Trumaine Johnson picked off QB Josh Allen twice in the win, recording his third and fourth interceptions on the season, his total now ranking second in the league among cornerbacks. The game was also only the second time in Johnson’s seven-year career that he has posted two interceptions in a game, the first time coming in Week 13 of 2014 when he intercepted Derek Carr and Matt Schaub in the win against OAK (11/30/14).

Johnson has now recorded 22 interceptions since entering the league in 2012, ranking him second among all active corners in the NFL, only behind CB Richard Sherman.

RB Elijah McGuire gained 60 yards on a single-game career high 17 carries, the most of any running back in the game. McGuire recorded a 34-yard carry, the game’s longest run, shortly before the end of the third quarter on a drive that would ultimately tie the game at 20. For McGuire, the carry represented his longest this season and the second-longest of his career.

McGuire would later score from one-yard out with 0:59 second remaining in the game, helping the Jets to their 27-23 win. It was his first touchdown this season and the second of his career.

Late in the first, WR Andre Roberts fielded a kickoff and returned it 51 yards to the Buffalo 46-yard line. The return marks the fourth kickoff return of 40+ yards for Roberts this season, the most of any returner in the NFL.

In the second quarter, Roberts took back his next kickoff return 86 yards to set up the Jets offense inside the 20-yard line, leading to the Jets first touchdown of the day. The return marks the longest of the season for Roberts and the second-longest of his career.

Among return specialists in the NFL, Roberts’ eight returns of 40+ yards (three punt, five kickoff) this season leads the league, and no other player has more than three. Additionally, Roberts is third among active, qualified players in kick return average this season with 27.1 yards per return.