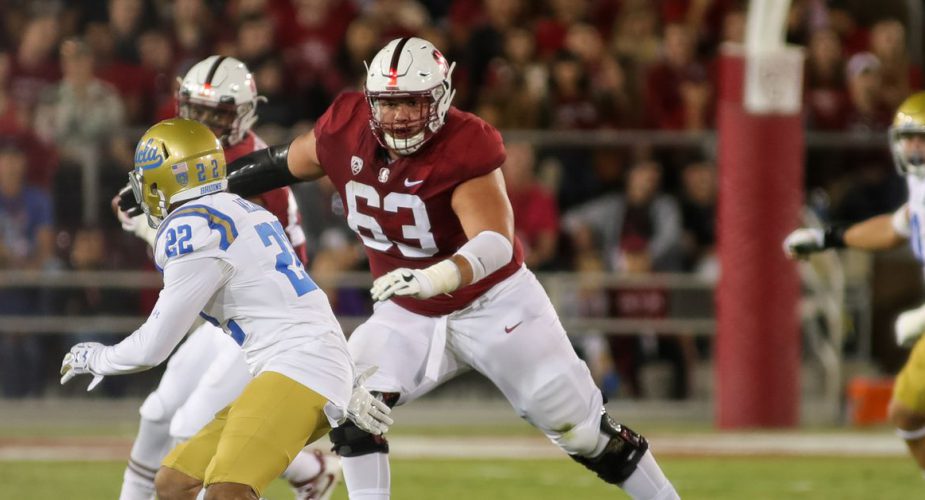 With that in mind, today we’re looking at Stanford offensive lineman Nate Herbig, a large man out of a school with a reputation for churning out quality NFL talent under head coach David Shaw.

At 335, Stanford's Nate Herbig (63) moves well enough to get outside and throw a block on this swing pass to Bryce Love. pic.twitter.com/yKien5H23g

An absolute mauler in the run game, Herbig has the size and strength to dominate at the point of attack and when engaging defenders at the second level.  When Herbig is on, he looks like a player who could dominate in the NFL for years to come.  Doesn’t move as well as Connor McGovern, who we previewed here, but he’s nimble enough to be effective while pulling.

In his strengths we mention Herbig’s ability to dominate when he’s on, but the issue is that we didn’t see that nearly often enough when watching a handful of Stanford’s games.  At times, he looked like a different player from the one who was brushing guys aside with ease.  Whether it’s a lack of motivation or a lack of concentration, the inconsistency is a concern.  If an NFL staff can get the best out of him, they’ll have a great long-term starter.

As we mentioned in his strengths, Herbig moves well for a big guy, but at this point it’s difficult to say for sure what type of offense Adam Gase we’ll run.  We’re assuming it will be heavy on rollouts and plenty of pocket movement, so as was the case with the aforementioned Connor McGovern, this could be a good fit as long as Herbig doesn’t add too much weight to his 335lb frame.