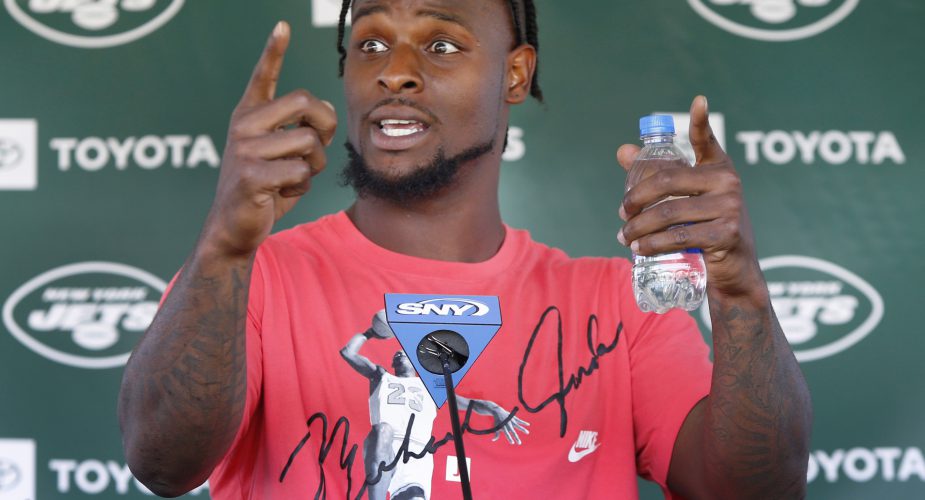 – Players in full pads and uniforms.  In previous practices some players wore shorts.

– Credit to the WR corps for taking advantage of Hines Ward being in camp. Whenever there’s an individual period someone is asking him for advice.

– Good bounce back performance by Adam Gase and the offense as they won the day in my opinion.  He went “extreme no huddle” (plays were being run with 28-30 seconds on the play clock) to get the offense in the flow.

– In one period to slow down the offense Gregg Williams cooked up a wild formation where basically only two players were in traditional positions. Everyone else was “floating” around, which caused four straight incompletions.

– With no drug tests to disrupt his flow LeVeon Bell had a good day.  Breaking off three big runs (20+ yards, 10+ yards and 20+ yards) during the 11 on 11 periods. Using his unique hesitation style on one run and exploding through the hole on the other two.

– Jamison Crowder continues to demonstrate his chemistry with Sam Darnold.  As he had multiple catches in traffic for first downs and one 30+ yarder for a TD. Crowder did injure his foot during practice and will undergo an MRI.  Coach Gase gave this update after practice, “I’m not sure yet. They’re still evaluating him.”

– The “bust police” can calm down as Quinnen Williams showed out today.  In 11 on 11 periods he had at least two “sacks” and one QB hurry.  And in the 1 on 1
period he showed his unique quickness/speed in beating his man.

– Two under the radar WR’s, Deontay Burnett and Greg Dortch showed up today. In their reps both caught everything thrown their way, Burnett had a sweet diving TD catch (15+ yarder) from Trevor Siemian in the back of the end zone. And in the 1 on 1 period both Burnett & Dortch showed good footwork in getting off press coverage.

– Tarell Basham and Frankie Luvu continue to “stack” practices.  Today Basham had at least two “sacks” while Luvu had a TFL (one armed tackle of Elijah McGuire) and a QB hurry.

– Derrick Jones showed up today as he had an INT of Trevor Siemian.  He displayed good technique as he stayed hip to hip with Josh Bellamy and then turned around at the right time to make the catch.  Also in 1 on 1 drills Jones showed good footwork and route recognition.  With so many CB spots up for grabs its now or
never for him.

– Chandler Catanzaro bounced back from his bad day over the weekend as he made 5-6 FG’s.  With his one miss coming from 55+ yards as it hit the crossbar.

– Sam Darnold was sharp as he spread the ball around to multiple receivers (Crowder, Qunicy Enunwa, Chris Herndon, Ty Montgomery and Robby Anderson). He also used his cadence to get the defense to jump offsides on a couple of occasions.  The “extreme no huddle” seems to fit his ability to improvise, will we see it when the games count?  Strong bounce back from Sunday’s slog by Darnold.