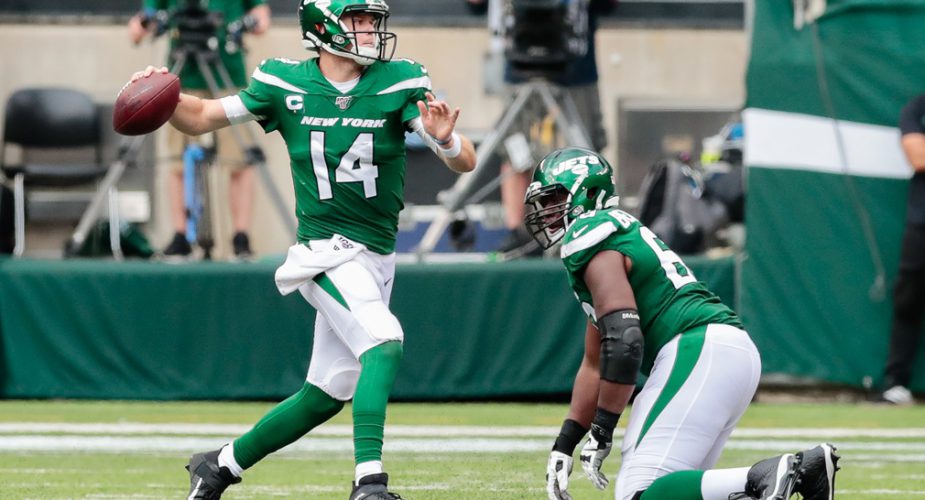 In what surely feels like the end of a seemingly years-long losing streak, Adam Gase and the New York Jets picked up their first victory of the 2019 season.

It was almost the perfect win for Gang Green as the Jets and their fans had high hopes with the return of starting quarterback Sam Darnold. It looked like the Jets were on the verge of a blowout win when they jumped out to a 21-3 lead, but as Jets fans know, it’s rarely that easy for Gang Green.

The Jets were staked to their big lead by a Le’Veon Bell 2-yard TD run that capped a 14 play 55 yard drive, followed by one of the longest scoring plays in franchise history. It came on a deep ball from Darnold to Robby Anderson from the Jets own 8-yard line, giving the duo a 92-yard hookup.

Ryan Griffin would score his first touchdown as a Jet from the 5-yard line before the end of the first half, putting the Jets in the driver’s seat.

Things were unfolding perfectly. As we mentioned prior to the contest, the Jets were hoping to see Darnold’s return lead to better pass protection, a more effective running game, and of course….points.

Well, it worked like a charm in the first half, but was stymied after the interval.

The Jets would go on to score just 3 points in the second half as the Cowboys chipped away at a Jets defense that was getting worn down slowly but surely as they started to spread the Jets defense out and run Ezekiel Elliot up the middle. Elliott had just 33 yards on his first 11 carries, but would pick up 72 yards on his next 17 carries, a far more respectable average of 4.2 yards per attempt. It was an Elliott TD that would bring Dallas within five as Dallas closed the gap to 21-16.

Sam Fickin would then hit a 38-yard filed goal to put the Jets up by 8 at 24-16 but still risked blowing the lead after Dak Prescott scored on a quarterback draw with under a minute remaining and Dallas needing a 2-point conversion to tie. That was not to be however, as Gregg Williams dialled up a blitz that sent safety Jamal Adams up the middle who was shot out of a cannon and forced an early and errant throw from Prescott, securing the victory.

It’s the first for Gase as he finally had a healthy starting quarterback under center. Now all he has to do is get back to 1 Jets drive to start to prepare for Bill Belichick and the Patriots.