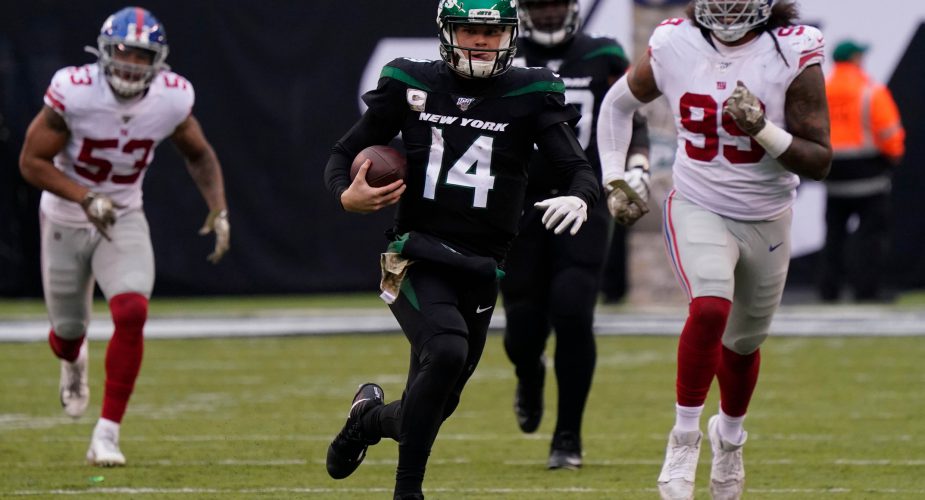 The Jets finally picked up their second win of the season as they hosted the struggling New York Giants and beat Big Blue 34-27.  After jumping out to an early 14-0 lead, the Jets fell behind but eventually came back to give their fans something to smile about.  Who stood out?  Let’s take a look.

Same old story with no push from the O-line, but giving anything more than a D+ for under two yards per carry seems a bit much.  Le’Veon Bell’s rushing TD proved big in the final score.

Demaryius Thomas and Jamison Crowder combined for 11 receptions for 165 yards and  a touchdown.  Robby Anderson had a quiet day but drew a big pass interference call while getting open deep down the field multiple times.

Not much production today as Chris Herndon was limited to 1 catch for seven yards but also had a big gainer wiped out on a holding call by Alex Lewis.

No push in the run game yet again, but Darnold was sacked just twice on the day.  Brian Winters left the game in the second half with an apparent shoulder injury that will be further evaluated tomorrow.

When you hold Saquan Barkley to 1 yard rushing and win the football game, you get a top grade.  The Jets got contributions across the board in terms of pressures and stuffing the run.  Second year lineman Nathan Shepherd picked up his first NFL sack and has seen significant reps since his return from suspension two weeks ago.  Nice story for Shepherd as many onlookers thought he was sure to be cut loose upon return.  Steve McLendon also had a half sack.

The backers played a key role in slowing Barkley down and also picked up 2.5 sacks with Jordan Jenkins getting a pair and James Burgess sharing a sack with Steve McLendon.  Rookie Quinnen Williams also picked up his play significantly in the fourth quarter and Foley Fatukasi was seen manhandling O-linemen on multiple occasions which has become a regular sight.

Jamal Adams played his best game as a pro, picking up a pair of sacks, two forced fumbles and one of the better plays of the year when he ripped the ball out of the hands of Daniel Jones and ran the ball back for his second touchdown of the season.  Adams is either driving up his asking price or trade value, but who cares?  Great day for a great player.

Rookie Bless Austin made his NFL debut and picked up a pair of passed defended and had what looked like a forced fumble in the game’s closing moments but the pass was ruled incomplete by the officials.  Daniel Jones did torch the Jets secondary for 308 yards and 4 TD’s, hooking up with Darius Slayton and Golden Tate for 14 receptions, 216 yards and all 4 of his TD’s.

Sam Ficken kicked a career long 53-yard field goal but missed from 54.  He finished the day 2-3 on field goals and the Jets coverage teams shut down the Giants return game.  Lac Edwards dropped a couple of punts inside the 20 and averaged 45.6 yards per punt.

For reasons that only he’ll know, Adam Gase waited until week 10 to start playing to Sam Darnold’s strengths.  We saw some hurry up, we saw some quick throws, we saw Darnold use his legs a little bit and attack all three levels of the defense.  Better late than never?  The defense struggled against the pass but not a bad job all around by Gregg Williams considering the rash of injuries on defense for the Jets.