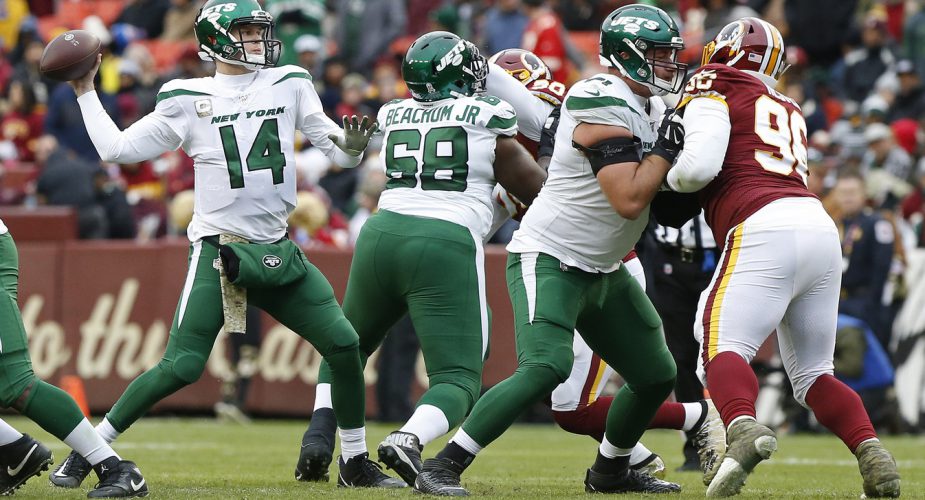 This Sunday’s game against the Oakland Raiders will go a long way in determining how Jets fans will view the success of this season along with the outlook regarding head coach Adam Gase.  Despite being guaranteed his job for next season, multiple online polls show that the majority of fans have already grown tired of Gase.  How can things turn around?  Beat a solid opponent in the Raiders, don’t do what the “Same old Jets” would do and lose to the Bengals or Dolphins and position yourself to have a realistic shot at a .500 season.  So beating the Raiders would be step 1.  Who has to step up to make that happen?

Last week Darnold lit up the 14th ranked Washington Redskins secondary so should have a chance at a big day in facing Oakland’s 28th ranked unit.  The Raiders have also allowed a whopping 24 touchdown passes, third worst in the NFL.  By comparison, the Redskins had surrendered just 15 TD passes heading into last week’s game.  Conditions for the game are expected to be wet and windy, but nothing extreme as of right now.

Prior to last week's game vs Washington, the Redskins had the NFL's 14th ranked pass defense and had allowed just 15 TD passes. This week the Jets get a Raiders secondary that ranks 28th in the NFL while giving up 24 TD's through the air. Big day for Sam in store?

Williams has come under fire from fantasy football fans who aren’t liking what they’re seeing in the box scores, but those watching Williams on film can see how pivotal he has been in the Jets being able to field the NFL’s number one run defense while seeing an uptick in production from the rest of the defensive line.  As Raiders head coach John Gruden pointed out regarding the Jets top ranked run defense, “They’re the No. 1 rushing defense in football and he’s the reason why”.  Incognito is still playing at a high level and a big part of why the Raiders rushing attack has been so successful up to this point.  This battle will be one worth watching along with Folorunso Fatukasi who should see significant reps this week.

Jamal Adams might see some one-on-one reps with Waller but look for the Jets to send Adams to get pressure in passing situations with Hewitt (or Marcus Maye) shadowing Waller who has been a revelation for the Raiders.  Waller has picked up 666 yards so far this season after posing a career high of just 85 yards two years ago with the Ravens.  As a former college safety, Hewitt should expect to put his coverage skills to the test.

Carr is completing a mind-numbing 72% of his passes so far this season with a 3-1 TD/INT ratio with 15 touchdowns to 5 picks.  Gregg Williams’ new look secondary will likely face its toughest challenge in weeks with Carr playing some of his best football after struggling for years after suffering a broken bone in his neck.  Carr is currently averaging 8.3 yards per pass attempt, the best of his career thus far.  Look for Williams to mix things up a bit between man and zone coverages to keep Carr on his toes.

Even under ideal weather conditions Adam Gase has phased Robby Anderson out of the Jets offense as Jamison Crowder, Demaryius Thomas and Griffen have become the focal part of Gang Green’s aerial attack.  If (and that’s a big if) the weather gets too ugly, Gase may opt to go ultra-conservative and give Griffen tons of targets.

The Raiders are the best team the Jets have played in weeks and Derek Carr’s quick throws will stop the Jets from piling up sacks the way they have as of late (16 in last three weeks) and the Raiders come away from this one with a 28-24 victory.