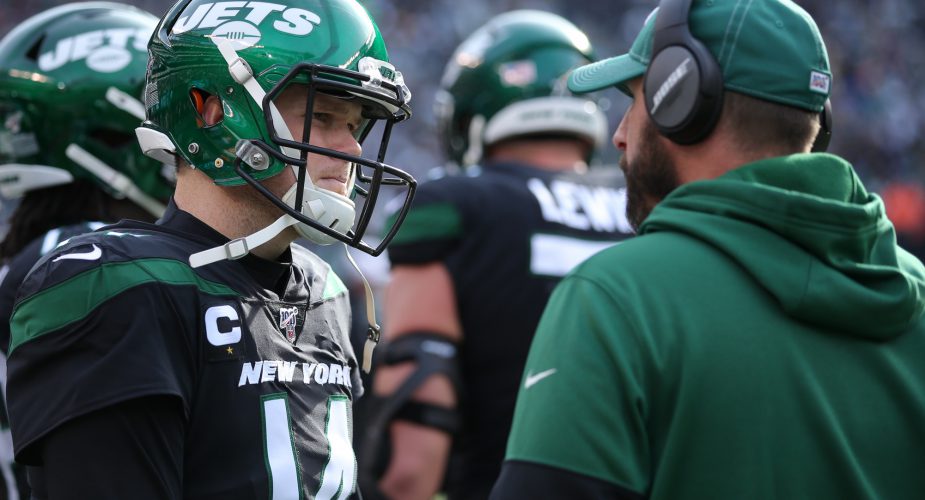 It wasn’t pretty and it wasn’t anything to brag about but the Jets won for the fourth time in five games as they squeezed by the Miami Dolphins 22-21.  I had multiple questions about this team coming into the game:

Shockingly all the questions were answered positively, let’s take a look:

– There were only four punts in the entire game.  So Braxton Berrios (1 ret / 12 yd avg) and Lachlan Edwards (3 punts / 42 yd avg) had no impact.  Surprisingly Edwards dropped the snap on an XP which caused a Sam Ficken miss.

– Ty Montgomery was solid in his 4 returns with a 22 yard avg.

– Their performance was a textbook example of “bend don’t break”, as they allowed seven FG’s but got tough when it counted.  A secondary that was ravaged by injuries played a ton of zone and didn’t get beat over the top.  Let’s get to the Jamal Adams “factor”, yes he was missed but that’s because this team hasn’t been constructed properly.  Adams blitz pressure was missing but if the roster had 1-2 pass rushers in the front seven things would’ve been different.  So the debate of whether to keep Adams or look to trade him for picks can continue for another week.

– The rush defense gave up more yards than usual as Fitzpatrick scrambled multiple times when he had nowhere to go with the ball.

– Quinnen Williams showed up today but it was definitely a mixed bag.  He had a huge tackle for a loss on a 3rd down to get MIA off the field but he grabbed the face mask for a penalty.  He had a QB hit on Fitzpatrick to cause a rushed incompletion.  And he whiffed on a sack in the red zone before he left with a neck injury according to Adam Gase.  Nice to finally see multiple “splash” plays now let’s clean up the mistakes.

– James Burgess was everywhere as he had 13 tackles, a TFL and a PD.

– Credit to Steve McLendon, Nathan Shepherd and Foley Fatukasi as they compressed the pocket consistently.

– The last time we saw Nate Hairston he was getting benched against NYG. As he returned to the field he was better as he had 2 PD and a QB hit on a blitz.  He also had an impressive INT of Fitzpatrick as he undercut the route and pulled the ball away from the WR.  But he has work to do on his tackling as he whiffed a couple of times allowing YAC.

– Besides an awkward pass interference penalty Bless Austin continues to impress.  Solid in his zone responsibilities and when he was in man he stayed step for step with the WR.

– Was Adam Gase trying to make a point today?  For the first time all year he committed to the run and rushed the ball 32 times for 112 yards.  But why did it happen in the game that LeVeon Bell didn’t play in?  Bilal Powell and Ty Montgomery definitely hit the holes quicker than Bell.  Was Gase sending a message to Bell about that or to Joe Douglas about not needing a high priced RB?

– Offense “blacked out” in the second half for too long of a period (from one minute left in the 3rd quarter until seven minutes left in the game).  I won’t complain about going for it on 4th down and bypassing the FG.

– Big bounce back from the OLine as they opened holes in the run game and kept Sam Darnold clean.  Shockingly they didn’t commit a penalty which has got to be a first.

– Huge game for Robby Anderson on the offensive (7 recs / 116 yards / 1 TD) and defensive side of the ball.  Yes, defense because on the drive where they went ahead 19-18 he prevented an INT.  Sam Darnold under threw Anderson in the end zone and he knocked the ball away from a DB stopping the turnover.

– Vyncint Smith had two HUGE plays that basically won the game.  On the first play of the final drive he caught a screen and created 35+ yards of YAC. Then with the game looking like it was slipping away he drew a pass interference penalty which the booth properly reviewed.  And Flores needed to stop all the yelling because it was obvious.

– Sam Darnold was solid (20/36, 270 yards, 2 TD, INT) as he led a game winning drive.  And he was particularly sharp commanding the offense in the first half as he made multiple pre-snap adjustments to beat the defense.  But there’s still things to work on:

* Has to be more aware to use his legs.  On the drive where they got stopped on 4th down he had an easy opportunity to scramble and get the first down on 3rd down and didn’t.

* Can’t take a sack on the final drive of the game.  The Smith pass interference call bailed him out.

* He wasn’t his accurate self today missing on throws that he makes in his sleep.

In my opinion Gase needs to add a “grey hair” offensive coach to his staff who can shake him out of the play calling funks he gets in.  Someone like Mike Martz (who he worked for in the past) who can hold him accountable.  Right now I don’t think there’s anyone on the offensive side of the ball that can do that.