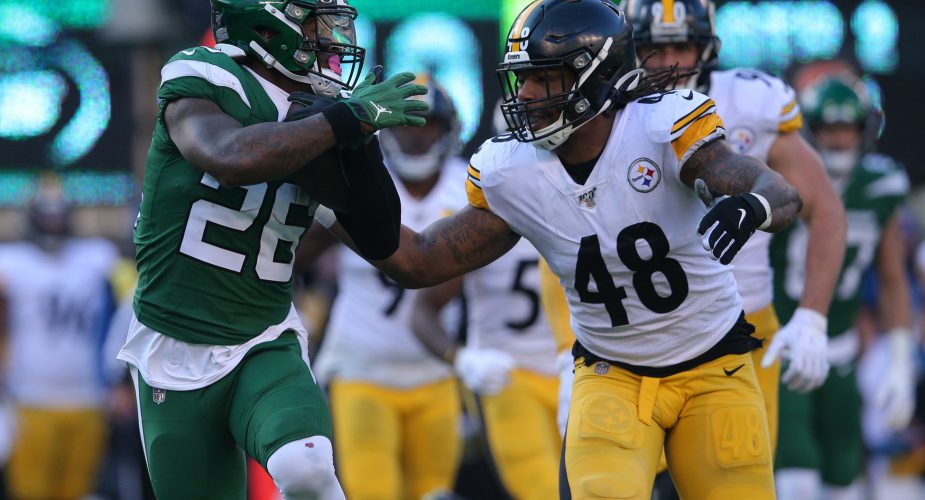 With the 2020 virtual off-season program drawing to a close, and teams beginning to report back to facilities this week, JetNation is going to take a deep dive into each position. Today, we focus on running backs, which is a relatively loaded group from a talent perspective. Below we will breakdown all ball carriers for the Green & White, and examine how they will fit into Adam Gase’s offense.

Le’Veon Bell (28 years old): In his first season in Gotham Green, Le’Veon Bell had a disappointing 2019 campaign. Coming off a full year of rest following a contract dispute with the Pittsburgh Steelers, Bell was awarded a 4 year $52.5 million contract by New York in 2019, $13.5 of which is due to him in 2020. He played in 15 games last season and averaged a career low 3.2 yards per attempt and finished with 789 yards and 3 touchdowns.

Despite the lack of production from Bell, there is reason for optimism heading into the 2020 season. He will have another year in Gase’s system under his belt, and the replenished offensive line should allow for better holes to run through. Bell, and a disgruntled Jamal Adams, have both reassured Jets fans that the best is yet to come from Le’Veon, as both have taken to social media to announce “Juice is back”. If Bell can return to form this season, he can take immense pressure off Sam Darnold’s shoulders in a pivotal year 3.

Le’Veon Bell’s vision is still amongst the top in the league, so even if all the problems of the new offensive line are not entirely rectified, he can still find success in 2020. Adding 6’7″ 365lb rookie tackle Mekhi Becton to the mix will make life for Bell and the other backs much easier. If the stars align in the run game for the Jets after ranking 31st in rushing yards and touchdowns last year, it’s not hard to suggest Bell can add another 1,000 yard season to his career resume.

Frank Gore (37): Veteran Frank Gore was added to the Jets earlier this summer, after a brief stay with the Buffalo Bills. Gore was in Miami with the Dolphins during Adam Gase’s time there, so there is familiarity between the two already. Gore played in all 16 games last year, including 8 starts, splitting time with rookie Devin Singletary, and finished with a modest 599 yards on 166 attempts (3.6 yards per attempt) and 2 scores. He ranks 3rd all-time on the leading rushing list with 15,347 yards, trailing only Emmitt Smith and Walter Payton.

Gore is only set to make the veteran’s minimum of $1.05 million this year, so his role with the team will not likely be major. At most, he will be a solid option in the run game, and can allow for Gase to split Bell out wide in passing situations. Gore’s football IQ is one of his best traits currently, so he can help bring along rookie La’Mical Perine, especially if the team decides to move on from Bell after the 2020 season. Plenty to like from Frank Gore entering in his 16th year in the league.

La’Mical Perine (22): A fourth round selection out of Florida, Perine looks to make a name for himself in New York. He is currently listed behind Gore on the depth chart, but that can easily change in the first half of the season. Perine is a very physical runner, and he showcased his strength in Indy at the combine, putting up 22 reps of 225lbs, 5th best amongst running backs. He was a 2 year starter for the Gators, tallying over 3,000 scrimmage yards and 30 total touchdowns in four seasons. Perine’s tenacious running style and ability to create in the passing game makes him an ideal fit for the offense. His versatility will allow Gase to use him and Bell interchangeably in the backfield as well as as receivers.

Josh Adams (23): Next up is Josh Adams. The former Philadelphia Eagles running back has ties to GM Joe Douglas, signing to the team in September of 2019 after being waived. He led the Eagles in rushing yards in 2018 with 511 yards, but was never able to solidify his roster spot in a crowded backfield in Philly. Late in the 2019 season, the Jets had to activate Josh Adams from the practice squad to the active roster so he wouldn’t be poached by another team, so it seems as though Douglas and Gase may have a plan for him. For now, Adams seems like a viable bench option if someone were to go down with an injury during the season.

Trenton Cannon (26): Trenton Cannon is not a very intriguing player for the Jets, but he has plenty of added value on special teams for coordinator Brant Boyer. While he isn’t going to wow you as a runner, only 177 career rushing yards, he did average 19.2 yards per return in 2019. He also added 3 total tackles as a special teams gunner, before landing on IR in November, cutting his 2019 season short. Cannon could become the latest of Mike Maccagnan’s failed draft selections if he doesn’t make the final 53-man roster in September.

Kenneth Dixon (26): Buried deep down on the depth chart is Kenneth Dixon. After three seasons with the Baltimore Ravens, Dixon played in only 6 games in 2018. He was still able to finish with 333 yards and 2 touchdowns, however, while averaging 5.6 yards per attempt. Kenneth Dixon was suspended 4 games in 2017 for violating the league’s substance abuse policy, which was then extended two additional games. Dixon will have an uphill battle to climb if he hopes to make the final Jets roster, as most teams prefer to only carry 4 running backs into a season.

Overall, the outlook of the Jets running back position is positive, and has plenty of potential to produce in 2020. The backfield as a whole will hope to have more success behind a revamped line that looks to have 4 new starters in the unit. If the running backs can reach their collective ceiling, it will create opportunities for Sam Darnold to have the best year of his career. After ranking in the bottom 5 in nearly every offensive rushing category, the only way to go is up for the Jets’ ball carriers.