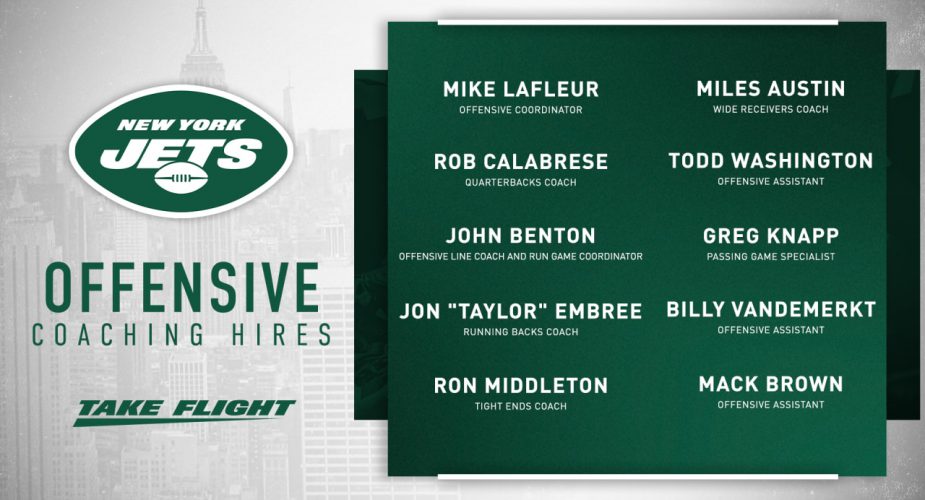 There have been several updates coming out of Florham Park today. We previously mentioned that Jeff Ulbrich will be the new defensive coordinator. Another big piece of news was the change in power structure, Robert Saleh will officially report to Joe Douglas. Otherwise, the offensive staff is now known. Here is the official release from the Jets, along with background information on each coach.

Mike LaFleur, who served on the same coaching staff as Jets head coach Robert Saleh in San Francisco, has been named the Green & White’s offensive coordinator. In addition to LaFleur, the Jets announced nine other offensive staff assignments.

LaFleur spent the past three seasons as the 49ers’ passing-game coordinator. San Francisco had 13 players with at least one touchdown reception in 2019, which tied an NFL record. During that ’19 campaign, TE George Kittle was named an Associated Press First-Team All-Pro and led the team with 85 catches and 1,053 yards and tied for first with 5 TDs. Kittle became the first tight end and fifth player in franchise history to have multiple 1,000-yard seasons, joining Jerry Rice, Terrell Owens, Anquan Boldin and John Taylor. Also in 2019, rookie WR Deebo Samuel’s 57 receptions and 802 receiving yards each ranked second among all rookies in franchise history.

“It all starts with the run game for us, which sets up the pass,” LaFleur said of San Francisco’s offensive philosophy in a 49ers.com article published last August. “But the big thing we like to say with our offense is they need to marry up with each other, they need to look the same. The way our offensive line comes off the ball in the run game is really no different than how they come off in the passing game, particularly on first and second downs. That’s everything for us and our philosophy in terms of marrying it up and making a defense not really know if it’s run or pass.”

In Atlanta, LaFleur worked with the wide receivers as Julio Jones finished second in the NFL with 1,409 receiving yards in 2016 and Mohamed Sanu set a career high with receptions 59. LaFleur first worked with the Falcons tight ends in 2015 and Jacob Tamme had a career-high 657 yards.

LaFleur, the younger brother of Packers head coach Matt LaFleur, grew up in Mount Pleasant, MI, played QB and S at Elmhurst College and graduated with a degree in physical education.

Quarterbacks Coach – Rob Calabrese
Calabrese, who is from East Islip, NY, spent the past two seasons with the Broncos as their offensive quality control coach. He played quarterback at Central Florida from 2008-12 and was a graduate assistant for the Knights from 2014-15 before coaching at Wagner from 2016-18.

Offensive Line – John Benton
Benton, who has 33 years of coaching experience, spent the past four seasons as the 49ers’ offensive line coach. In 2019, San Francisco’s rush offense finished No. 2 in the NFL and the Niners’ 144.1 yards/game were the fourth-most by the team since 1990. The offense also had three players rush for at least 500 yards for the second time in franchise history and the first since 1954.

Running Backs Coach – Jon “Taylor” Embree
Embree spent the 2020 season as the tight ends coach at the University of Colorado. Before CU, he spent four seasons in the NFL working for the Chiefs in 2016 as a defensive assistant and for the 49ers from 2017-19 as an offensive quality control coach.

Tight Ends Coach – Ron Middleton
Middleton, who played 10 seasons in the NFL with five teams, was most recently the Jaguars’ tight ends/assistant special teams coach from 2013-20. He helped TE James O’Shaughnessy set career highs in 2018 in receptions and receiving yards. In 2017, Middleton’s group was critical in helping the Jags lead the league in rushing (141.4 Yds/G). Prior to Jacksonville, Middletown was Duke’s associate head coach, special teams coordinator and tight ends coach.

Wide Receivers – Miles Austin
Austin was with the 49ers as an offensive quality control coach for the 2019 season but left the role after their Super Bowl loss. Austin, who grew up in Summit, NJ and went to Monmouth University, played for the Cowboys from 2006-13 and led the NFC in receiving yards in 2009. He appeared in two Pro Bowls and later worked as a scout with the Dallas Cowboys in 2017-18.

Passing-Game Specialist – Greg Knapp
Knapp has coached in the NFL for 25 seasons and spent the last three as the Falcons’ QBs coach. QB Matt Ryan threw for 4,466 yards in 2019 and had 11 300-yard games, a new franchise record, and tied for the third-most games in a single season in NFL history. Knapp has coached six 4,000-yard passers and 13 players that have played in at least one Pro Bowl.

Offensive Assistant – Todd Washington
Washington has been an offensive assistant with the Jets since 2019. He’s coached eight seasons in the NFL after eight seasons as a player. As a coach, he’s spent time in three other professional leagues: the XFL, the AAF and the UFL.

Offensive Assistant – Mack Brown
Brown spent the past two seasons with the Jets as a defensive assistant working with the team’s inside linebackers. Prior to joining the Jets, he spent three seasons as the offensive coordinator and quarterbacks coach at Missouri State.