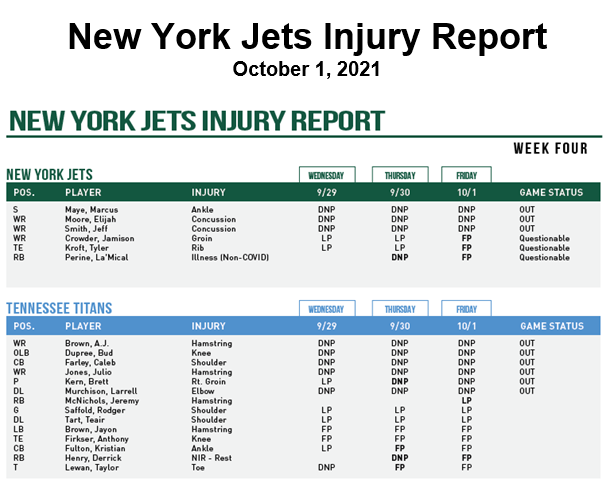 The NY Jets released their final injury report of the week, and as expected, Marcus Maye (ankle), Elijah Moore (concussion) and Jeff Smith (concussion) are all out. Listed as questionable are Jamison Crowder, Tyler Kroft and La’Mical Perine.

The Titans have a long injury list with wide receivers Julio Jones and A.J Brown both listed as out for Sunday.

Head coach Robert Saleh gave this update to the media.

Marcus (Maye), obviously, that one popped up late, and Jeff Smith, are both going to be out. Other than that, everything else is status quo. Jamison (Crowder) is looking good.

When did Marcus Maye get hurt?

You know, Marcus finished the game. He suffered it in the game, but he still finished. Wasn’t anything to be concerned about. Came in Monday, got a little bit of treatment, still no concern. Tuesday, pain kind of was elevating so we went to get some more further tests and the tests didn’t come in until mid-afternoon Wednesday, when everything broke. We weren’t expecting him to be out this week and it was a free fall from Wednesday.

Who fills in for Maye?

Ashtyn (Davis) comes back. Obviously, we can’t get him a full game in there because he hasn’t played football in a year, but we do plan on getting him part of the rotation, along with Jarrod Wilson and (Sharrod) Neasman. They’re both back. We’ll have a good little rotation in there and play the hot hand, but they’ve all got to be ready to play.

Elijah Moore and Jeff Smith are out, is Denzel Mims going to be active on Sunday?

Denzel will be active this weekend. He’s going to get some opportunity. Hopefully he takes advantage of it, and we’re expecting him to. He’s stacked up a third consecutive week of great, deliberate practice. He’s really getting comfortable within the offense. We’re excited to see him get his opp.

You had stressed that (Mims) had to learn all three positions. I don’t want you to give away your game plan, but can you use him? Are you comfortable enough to use him anywhere?

No, and maybe I did say that. I’m not sure if I did. For him, really, it was the Z and the X. The F, I mean we have enough F’s, right? We got Elijah, you got (Braxton) Berrios, you got Jamison. But he’s comfortable in those spots and we’re comfortable to use him. Again, it’s gotten to the point where he doesn’t even need to talk to the coach anymore. He’s just on the football field, he’s getting himself lined up and you’re seeing the speed and the athleticism that he has. So, just a matter of getting him those opportunities, taking it to Sunday and executing with his teammates and being the guy that we expect him to be.