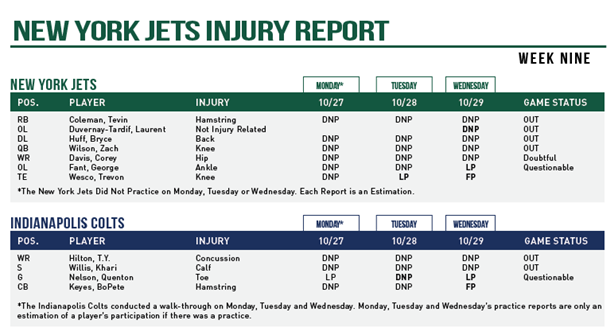 The NY Jets take on the Indianapolis Colts on Thursday night and here is their final injury report of the week.  The following players are definitely out for Sunday:  Tevin Coleman, Bryce Hall, Zach Wilson and newly acquired guard Laurent Duernay-Tardif also won’t play.

Corey Davis is doubtful and George Fant is questionable.

Some other injury updates from head coach Robert Saleh this week:

He’s going to be a couple weeks still. He’s getting closer. His knee feels really good. But the biggest thing is trying to regain some strength back in that knee and that leg. He is a big man, but he’s coming along good.

So, we gave Jarrad a couple series off during the game, all with the mindset with trying to help him get to Thursday. And it’s going to be the same thing this week. I thought he did a really nice job, first game back in a while. Again, his playing legs underneath him and the speed at which he can play, his length, all that stuff, he’s a hard hitter, he’s a great communicator, and I thought he did a really nice job. And for him, again, let’s stacked it up, put a little bit more on his back and continue to build his playing strength.