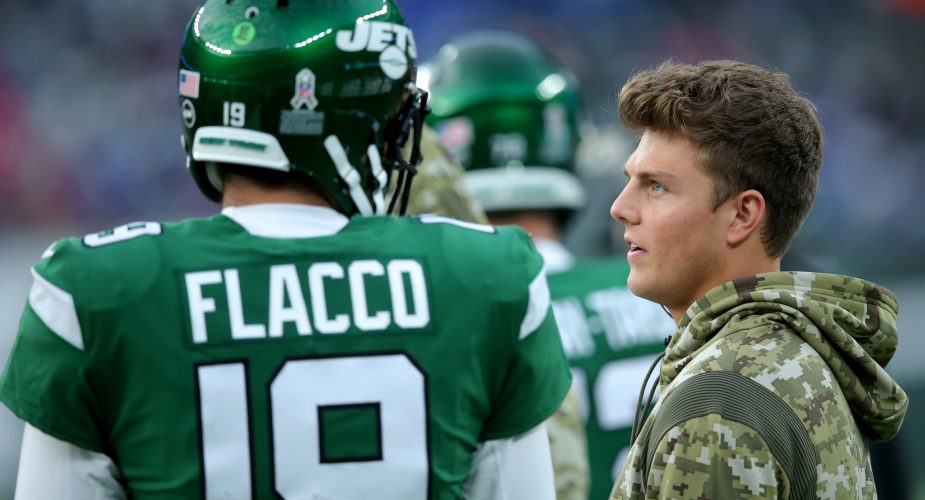 The New York Jets needed a miracle to beat the Cleveland Browns in Week 2 to avoid a disastrous 0-2 start, but at the end of the day, style points don’t show up in the win-loss columns.

New York showed plenty of heart in their thrilling comeback win against the Browns. Trailing by 13 points with less than two minutes to go, Joe Flacco kept the game alive by throwing a 66-yard TD strike to Corey Davis.

The Jets recovered the ensuing onside kick, and Flacco hit rookie Garrett Wilson for a 15-yard TD in the waning seconds to help the visitors pull off the stunning comeback. With the victory, New York ended a three-year streak of starting out 0-2.

Flacco pieced together a much better performance a week after losing to his former team, the Baltimore Ravens, in Week 1. Though Flacco had 309 passing yards, it’s important to note that he attempted a whopping 59 passes. The Super Bowl 47 champion and MVP had one TD on the day to go along with one interception and three sacks as Baltimore’s defense propelled the visitors to a 24-9 victory.

There was no shame in losing to the Ravens, who are one of the prime favorites to win the AFC in 2022. The state of Maryland is widely expected to launch sports betting in the near future, and FanDuel Maryland will be among the first apps available to customers. Some of these apps will offer new users special risk-free wagers and other bonuses upon signing up.

Only seven teams currently have higher Super Bowl 57 betting odds than the Ravens at FanDuel (+1800). They’re also the +100 favorites to win the AFC North division, with the Cincinnati Bengals behind Baltimore at +290.

Flacco has provided vital stability for the Jets with starting quarterback Zach Wilson currently sidelined with a knee injury that he suffered in preseason.

Wilson required surgery and was ruled out for the first three weeks of the season by head coach Robert Saleh. At this time, it looks like the No. 2 pick of the 2021 NFL Draft will not return until Week 4 at the very earliest (vs. the Pittsburgh Steelers at 1:00 p.m. EST).

Through the first two weeks of the regular season, Flacco (616 passing yards) trailed only Tua Tagovailoa (739) and Carson Wentz (650) in passing yards. On top of that, only seven signal-callers topped Flacco’s five TD passes entering Week 3.

Flacco has traveled aplenty across the NFL ever since the Baltimore Ravens made Lamar Jackson their permanent starter back in 2018. Jackson won seven of eight starts as a rookie and led the Ravens to their first AFC North division crown in six years, thus making Flacco expendable.

In 2019, the Ravens traded him to the QB-needy Denver Broncos for a fourth-round draft choice. A season-ending neck injury unfortunately limited Flacco to eight games with the Broncos, and he was released in the ensuing offseason.

Flacco signed with the Jets in 2020 and served as Sam Darnold’s understudy. Flacco played four games with Darnold sidelined, and he finished the season with six touchdown passes against three interceptions. This included an impressive three-TD outing in a Week 9 home loss to the archrival New England Patriots.

The Philadelphia Eagles signed Flacco to back up Jalen Hurts in 2021, but a knee injury to the aforementioned Zach Wilson prompted the Jets to bring him back via trade in exchange for a conditional sixth-round draft choice.

Make no mistake, Wilson will be the starting quarterback when he is cleared to return. But the journeyman QB has shown the NFL that he’s still capable of being a short-term starter for any team that needs it. Simply put, his early 2022 performances will go a long way in buying Flacco more playing time and opportunities in the NFL.

Saleh and the Jets can take comfort in knowing that they own one of the NFL’s better backup quarterbacks. And ultimately, it wouldn’t be a surprise if the Jets decided to bring back Flacco again for the 2023 season.