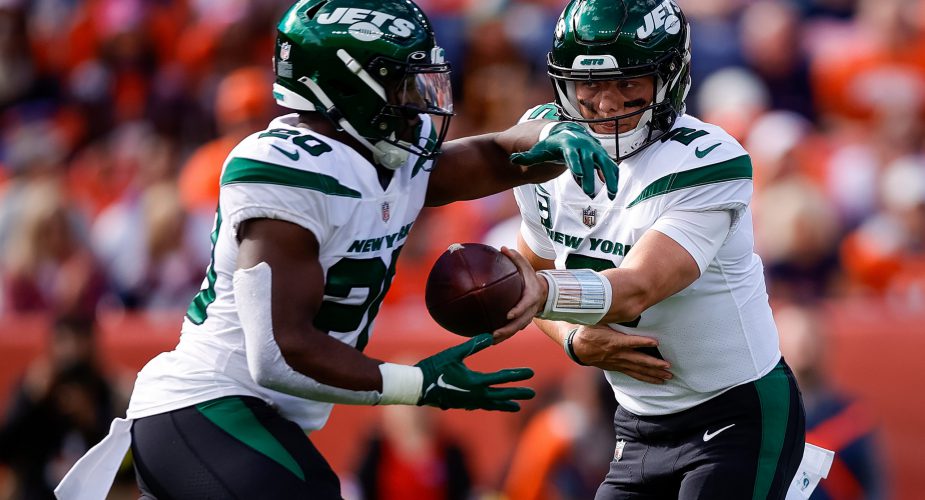 Observers of the league knew this would be an ugly, defensive and low-scoring game. If the Jets were going to win, they would have to overcome an excellent DEN defense and altitude. But who knew they would also have to overcome losing four offensive starters: Elijah Moore (pouting), Corey Davis (knee), Breece Hall (knee), and Alijah Vera-Tucker (elbow). With all that adversity, it would’ve been easy for the “Same Old Jets” to re-appear, but a new day seems to be dawning as they gutted out a 16-9 win:

– Greg Zuerlein was the difference in this game as he was perfect (3/3 FGs, 1/1 XP) generating 10 of the team’s 16 points. While Brandon McManus of DEN left 4 points on the field with a missed FG and XP. Those 4 points made a HUGE difference at the end of the game; protecting a 16-9 lead is easier than a 16-13 lead.

– Braden Mann was excellent with a 54.8 average but he’s got to eliminate the “shanks”.

– No opportunities for Braxton Berrios on punts (fair catches) or KOs.

– Solid effort by the defense but DEN offense has been garbage so it must be graded on a curve. Particularly with Russell Wilson out and Brett Rypien making the start. But only giving up 9 points on the road against a team with weapons like Jerry Jeudy, Courtland Sutton, KJ Hamler and Melvin Gordon can’t be “sneezed at”.

– The “front seven” was solid in controlling the DEN running game (105 yards), which kept Rypien out of easy down and distances. But I was surprised at the DLine only generating one sack, with Rypien attempting 46 passes.

– But the stars of the defense was the secondary:

* Ahmad Gardner was a beast with 10 Tackles and 3 Passes Defensed. And I apologize to him for being critical of his tackling; he’s improved dramatically during the season. Gardner has also earned respect from the officials in only seven games; they are letting him get away with “chicken fighting” WRs without calling pass interference penalties. His battles with Sutton on the last drive were very physical, but no flags. And here’s an amazing stat, Gardner has 12 Passes Defensed in only seven games he’s on pace for 30 Passes Defensed over a full season; that’s crazy!!!

* DJ Reed had 8 Tackles with 3 Passes Defensed and I thought he put Jeudy out of the game with the tackle he laid on him. What a free agent pickup (3 years / $33 million), and to
think JC Jackson (5 years / 82.5 million) is being benched by the LAC.

* The safety tandem continues their solid play. Jordan Whitehead had 4 Tackles and a Pass Defensed while Lamarcus Joyner had a Pass Defensed and a big INT that set the offense up for a FG. And most importantly, on deep passes, both of them are providing excellent support to the CBs. Nice to see “busted coverages” disappearing.

* Michael Carter and Brandin Echols both deserve credit for their contributions. They rotate in, and there is no visible drop-off in production when the starters take a break.

* CJ Mosley (8 Tackles) and Quincy Williams (5 Tackles) have been physical with an excellent range as the starters at LB. But Kwon Alexander and Marcell Harris have been valuable as backups, providing excellent speed off the bench.

– The best thing that could be said is the offense didn’t turn the ball over and was able to provide one explosive play. Other than that, it wasn’t a good effort, particularly as they shot
themselves repeatedly with 11 penalties for 85 yards.

– Breece Hall was terrific, with 4 Rushes for 72 yards and a TD before getting hurt. And most of the rushing offense that was generated (24 Rushes / 155 Yards) came off of Hall’s legs.

– With Hall out, Michael Carter and a RB committee will have to carry the load. I wouldn’t mind if Joe Douglas sent a pick to CLE for Kareem Hunt. We need a RB with the power to balance out Carter and Ty Johnson. If Hunt isn’t an option, keep your eye out for Tevin Coleman being brought back.

– I like the creativity that Mike LaFleur brings to the offense but he has to be better in short-yardage situations. We shouldn’t have to be passing the ball on 3rd & 1 or 3rd & 2

– The best things to say about Zach Wilson are he’s 4-0 since coming back, he didn’t turn the ball over, and he was able to escape pressure. Other than that going 16/26 for 121 yards isn’t good, and he MUST SHOW better awareness when escaping the pocket. He was lucky he didn’t give up a “scoop & score” on that STUPID double “spin-a-rama”. Other than the 4th quarter of the PIT game, we have not seen much out of Wilson in terms of flashing “franchise QB” ability. I understand the MIA, GB, and DEN games focused on the ground game, and the NE & BUF games won’t be easy. But I’m definitely looking for that “franchise QB” ability to appear and remain before his second season is over.