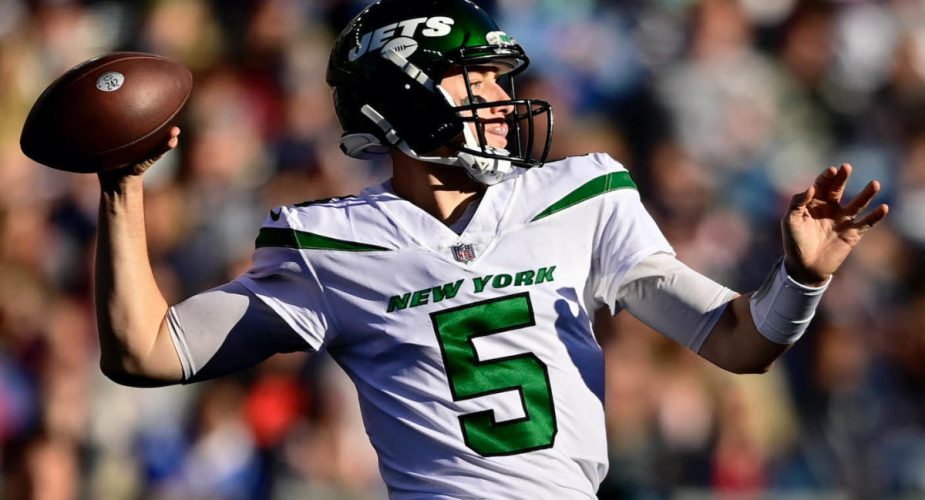 What is left to be said about the NY Jets game last Sunday? The numbers were atrocious, but you’ve seen them all by now. Particularly frustrating is the fact that New England’s defense is not nearly as good as their stats from the game suggest. The Chicago Bears went into New England on a Monday night and scorched the Pats for 33 points.  Somehow the Jets made the Pats defense look like the 1985 Bears. If the Jets managed to put up the same number of points as they did just a few weeks ago against these same Patriots (17), they would have won by double digits.

As if the on-field performance was not enough, the post-game press conference was a kick in the gut that none of us needed. While most quarterbacks fall on their sword after a big loss, Zach Wilson couldn’t find that page in his mental playbook. The only thing worse than the way Wilson played Sunday is the way he spoke and didn’t speak after the game. While we can understand a young quarterback who is still developing and not playing well in New England against a Bill Belichick defense, it’s hard to understand just how Wilson can be so immature in his team mindset. Coach Saleh announced Wednesday that Mike White would get the start this Sunday against Chicago. Wilson’s poor play was likely the second item on the list of things that got him replaced as the starting quarterback. Losing the support of your teammates is a much more efficient way for a quarterback to get benched, not to mention run out of town.  Wilson had all the right things to say after the announcement was made that he was benched. It remains to be seen if he can live up to those words or if he truly is the guy that spoke after the nightmare in New England.

One sure thing about this week’s game is that the Jets will not lack energy at the quarterback position.  White is energetic, if nothing else. While Wilson seems lethargic at times, White will always play with a high level of emotion, no matter how well he performs. Saleh should have made this change to start the fourth quarter of Sunday’s game in New England. Failing to make the switch means Saleh can’t go back to Wilson if White plays poorly. Saleh lost all his flexibility by sticking with Wilson against the Pats. If he pulled Wilson, he could have said in the post-game that Wilson was still his guy, but the team needed a boost, so he inserted White. That way, if White was equally terrible in New England, he could go back to Wilson. Now the Jets are in ride-or-die mode with Mike White, who has five touchdown passes and eight interceptions for his career and hasn’t thrown a pass this season.

The saddest part of this whole saga is that the Jets are still unsettled at quarterback despite spending two top-five picks on that position in the last four years.  The free agent money and/or draft capital needed to go after another potential starting quarterback are resources the Jets could have put to improving other weaknesses.  Now those areas will need to go without, and that will mean a weaker team than what the organization could have potentially put on the field in 2023.

This week, as if on cue, the Jets get to see another one of the quarterbacks they passed on for Zach Wilson.  He is listed as questionable so, assuming he is healthy, Justin Fields comes to town just as he appears to be developing into a bona fide franchise quarterback. Fields has been doing it through the air and on the ground. Fields has run for 834 yards and has seven rushing touchdowns.  Despite those stats, the Bears are just 3-8 and have lost four straight games.

The Jets biggest challenge this week may not be the Bears. The Jet’s fiercest opponent will be the hangover they are undoubtedly feeling after the debacle in New England. It was the biggest game of the year and arguably the biggest game in multiple years, and the team met that challenge with abject failure. Inserting a new starter at quarterback may counter the hangover to a certain extent, but that feeling of failure is not something that typically goes away quickly. The Jets do not, however, have the luxury of time. If the Jets are going to stay in the division race and the playoff hunt, they simply cannot lose at home to the Bears. Somehow the team needs to put last Sunday’s nightmare behind them and play good football. As well as Fields has played, he will turn the ball over. He has fumbled it eight times and has eight interceptions on the season. Nothing helps a struggling offense get back on its feet like a short field.

If Fields can’t play, Trevor Siemian will get the start. Siemian is familiar with the Jets having played here in 2019 before moving to New Orleans.  Siemian can make the obvious throw, but he doesn’t possess a rocket arm or great instincts. Siemian will also be a sitting duck in the pocket for the Jets pass rush compared to the fleet-footed Fields. The Jets can only play better offensively than last week, and they should win no matter who gets under center for Chicago.