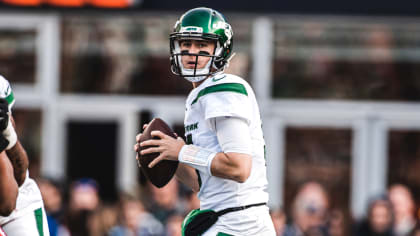 The New York Jets couldn’t have hoped for a better outcome.  In giving Mike White his first start of the season, the Jets had hoped to get their offense on track and did it ever.

Mike White was sharp from the outset, leading the Jets on a 10 play drive the covered 75 yards and culminated in a Garrett Wilson touchdown reception from White.  It was Wilson’s first of two scores on the day.  His first an 8-yarder, the second a 54 yard catch and run.

Also joining the party was second-year receiver Elijah Moore.  Largely forgotten this season, Moore hauled in just two catches but made the most of his opportunities.  Moore broke away from defenders to pick up 42 yards on his first catch before pulling down a 22-yard score later in the day.

In fact, White got plenty of receivers involved.  In all, ten different players caught a pass with rookie undrafted running back Zonovan “Bam” Knight being the surprise among the group.  Active for the first time this season, Knight logged 3 catches for 34 yards and led the Jets in rushing with 69 yards on 14 attempts.

The offense was efficient and methodical under White while the defense overcame some early sloppiness to shut the Bears down.  After falling behind 10-3 on some missed tackles and blown coverages, the Jets buckled down and pitched a shutout the rest of the way.