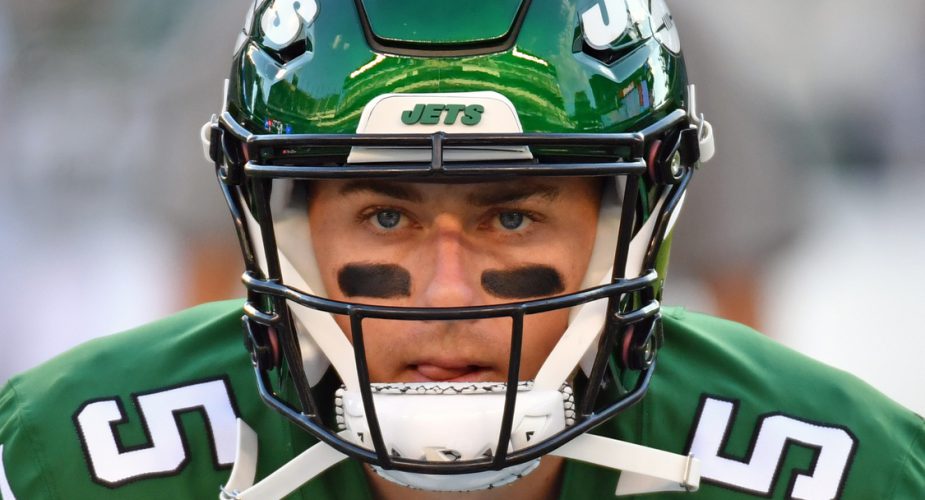 I’m not going to lie, after the Chicago Bears scored on their first two drives and was up 10-7, I was nervous.  Were Trevor Siemian and an inferior/injured team going to derail the Jets’ playoff hopes?  Thankfully the defense stabilized, and Mike White ran the offense to perfection as the Jets ran away from CHI 31-10. Let’s take a look:

– Greg Zuerlein was 4/4 on XP and only 1/2 on FGs (missing a 53 yarder).  But he made a game-changing 57-yarder at the end of the first half to put the team up 17-10.  In a rainy downpour, I expected a shank, but Zuerlein came through. And with the weather getting worse it didn’t feel like CHI would be able to score a TD in the second half.

– Compared to last week Braden Mann barely saw the field as he only had to punt twice all game (59 yd avg).  He wasn’t wearing gloves on Zuerlein’s first FG attempt and couldn’t handle a low FG snap.  But he made the “fashion” adjustment and was solid the rest of the game.

– Solid punt return game by Braxton Berrios (19 yd avg) as his 22-yarder put the team at midfield.  Which ultimately led to Elijah Moore’s TD that put the team up 24-10.

– As stated earlier I was nervous as CHI scored on their first two drives.  It seemed like the defense was a step slow (too much turkey?) as they tried to decipher what Siemian was doing.  But good adjustments and execution allowed them to pitch a shut out over the final 44 minutes of the game.  It was nowhere as dominant as last week’s effort but even so they gave up only 10 points.

– Ahmad Gardner (3 Tkls) and DJ Reed (6 Tkls) had their “worst” game of the year. Usually they’ve given up nothing and taken the ball away but today they had plays that led to scores.  As Gardner was called for a pass interference penalty (his first?) which led to a CHI FG.  And Reed gave up a TD as the CHI receiver (Pringle) pulled the pass out of his hands.  After those “blips” they recovered and shut down CHI receivers over the last three quarters.

– CJ Mosley had the best defensive “stat” day with 10 Tkls, Pass Defensed, QB Hit and an INT.  But he was exploited early in the game on a couple of RB crossing routes.

– Bryce Huff in his limited reps as a “designated pass rusher” showed up again with a Sack, TFL and a QB Hit.

– I’ll credit this observation to Daniel Jeremiah of the NFL Network.  He’s said in the past “that the Shanahan offense has completions baked into it”.  And today we saw those completions flow easily as Mike White ran the offense to perfection (Mike LaFleur sure got smart in a week).  Granted, CHI was a poorly rated defense but how enjoyable was it to see a “two handed” offense move up and down the field?

– Excellent game by the OLine as health finally smiles its face on them with Max Mitchell returning to RT.  They kept Mike White clean in the pocket (one sack) and opened up holes in the running game (32 rushes / 158 yards).

– And for the first time in quite a while there were multiple skill players that stood out:

* Garrett Wilson with 5 catches for 95 yards and 2 TDs.
* Elijah Moore finally showed up with 2 catches for 64 yards and a TD.
* Tyler Conklin with 3 catches for 50 yards.
* With Michael Carter going out with an injury, Zonovan Knight and Ty Johnson shined.  Knight    had 14 rushes for 69 yards and 3 catches for 34 yards.  Very impressed with his combination    of speed and power (which we haven’t seen yet from James Robinson).  While Johnson took  advantage of his increased reps as he had 5 rushes for 62 yards and a TD.

– There’s nothing to say except Mike White, Mike White, Mike White.  He ran the offense to perfection as he was 22/28 for 315 yards and 3 TDs.  He was quick with his decisions, scanned the field for receivers and was willing to hit his “checkdown” when nothing was available. Extremely impressive was the fact that his 22 completions went to 10 receivers never allowing the defense to focus on a specifc player.  White also showed two traits I didn’t know he had as he played in a rainy downpour.  First was his hand size, with a slick ball he was able to grip and spin it with no wobble on his passes.  Second is his arm strength, on balls into the middle of the field he was able to get it into tight windows.  Particularly impressive was the second TD to Wilson, as White got it through the hands of a LB into Wilson’s hands.  You couldn’t have asked for a better debut, but the challenges will get tougher can he continue to have a high completion % and not turn the ball over?  Let’s hope so.