The NY Jets are now outside the playoff picture after dropping three of their last four games. 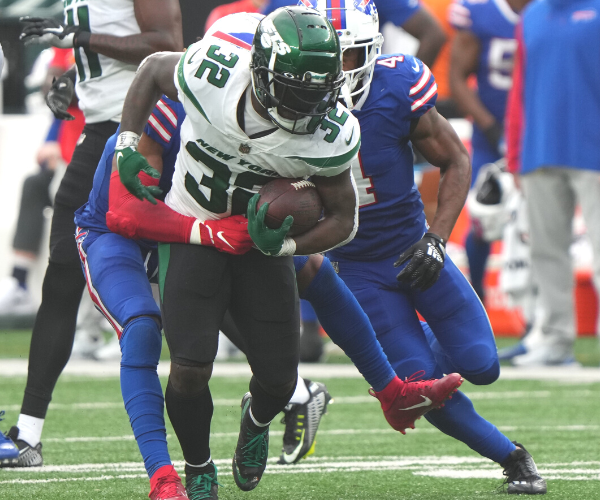 It just wasn’t good enough. We said the Jets needed to be great to win in Buffalo. They weren’t great. There were some aspects of the game where the Jets were great. The defense held the high-scoring Bills to just 20 points. The Bills had just 14 first downs for the game and were just 2-13 on third down. The Bills had just 232 total yards on the day and only 130 yards passing. Those are great numbers. But they are the only great numbers. The offense did nothing great. The offense was average…again. Twelve points aren’t going to win against Buffalo. The Jets allowed four sacks, and they allowed the Bills to batter Mike White, sending him to the medical tent multiple times. The Jets also lost the turnover battle 0-2. There is nothing significant in any of those stats.

Fine. The Jets are not ready to win in Buffalo. That means they are like just about every team in this league. It was a tall order, and Gang Green couldn’t reach that high. Moving on. The Jets are now outside the playoff picture looking in after dropping three of their last four. The remaining four games are all very winnable. Two of those games are at home; two of those games are on the road. In all likelihood, the Jets need to win three of their last four games to make the playoffs. They must win both home games (Detroit/Jacksonville) and get at least a split on the road (Seattle/Miami). That is what it is going to take, and that is very doable for this team.

The Detroit Lions will come to play Sunday. They come to play every week under Dan Campbell, who should be given the coach of the year award at season’s end, if not sooner. Detroit is 6-7 and in a similar playoff position to the Jets. They are alive for the playoffs but on the outside looking in. Like the Jets, nobody figured the Lions would be in playoff contention at this point in the season. After losing six of their first seven games, The Lions have won five of their last six, and they are one of the hottest teams in the league. The Lions have the fourth-rated offense and rack up 376 yards per game, with 127.5 of those yards coming from the run. The Lions are more than capable of winning Sunday if the Jets don’t play well.

Despite their recent success, the Lions are a different team on the road than they are at home. Only two of their six wins have come away from Detroit (Chicago/NYG), and their high-flying offense is much less potent away from the Motor City. The Jets should be able to slow Lions’ offense down with physical play. The Lions have struggled to give Jared Goff time against the rush. The Jets should be able to tally multiple sacks on Sunday after not sacking Josh Allen once in Buffalo. While the Lions have talent at the outside skill positions, The Jet secondary matches up well. On the other side of the ball, the Jets’ offense should find its rhythm against Detroit. Most teams do. The Lions have the second-worst defense in the league, allowing nearly 27 points per game. It will be a huge disappointment if the Jets don’t hit that average while holding Detroit’s offense well under its scoring average for the year. It’s a home game. It’s a must-win. The Jets are the more physical team. They are the more complete team. The Jets should handle the Lions at home.