The Meadowlands: Home of the Braves?

The Atlanta Braves- are they a successful franchise for the Jets to emulate or an example of what the Jets need to avoid? 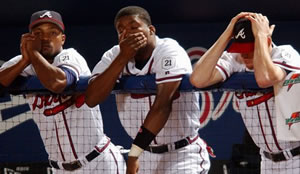 The Atlanta Braves last season proved many experts (and myself) wrong by overcoming injuries and offseason player losses to win their 13th consecutive division title. The first three years were as National League West champions, and the next ten have been as National League East champions due to realignment.

The strength of the Braves throughout this stretch has been their pitching staff, which last year had the major leagueâ€™s best staff ERA for the 10th time in this 13 year span. The streak started in 1991 when the Braves made history in becoming the first team ever to reach the World Series just one year after having baseballâ€™s worst record. This run of titles has only been interrupted by the strike shortened season of 1994, when they were in second place behind Montreal. It could be argued that the Braves were the â€œteamï¿½ of the 90â€™s with their world championship in 1995 and this run of division titles throughout the decade.

Some people might be thinking: what is the point this author is trying to make? I don’t get it!

The goal of any sports franchise obviously should be to win a world championship, whether it be baseball or football. To settle for less and to achieve short of that goal is not my idea of a “team of the century” that the Braves might be considered for to represent the 1990â€™s. There is always something to be said for putting your team in a position to win that championship by making the playoffs. Moral victories of just making the playoffs are hollow for this Jet fan, and I am sure for most Brave fans throughout their 13 year run. To make the playoffs three out of last four years has been equally enjoyable and excruciating for myself. The high last year of winning in O.T. in San Diego to the low of two–two— missed Brien field goals in Pittsburgh as an example. To be close and not able to make it to the top leaves you frustrated because there are never any guarantees of getting close the next year or the next year or the next year.

The ultimate goal to win a world championship is how teams are measured in historical terms- no one except the losing team and their fans remember the losers of the Super Bowl or all the other NFL teams that didn’t win. The Jets have to be measured and strive to be the NFL champions and not be similar to the Braves–a 13 year run of success in making the playoffs but failures in winning a world championship for all but one of those years.

If the Jets want to emulate success we need to look at the Patriots, as distasteful as that might seem for some Jet fans, and not the likes of the Braves of the baseball world who always manage to be close but not get that world championship.