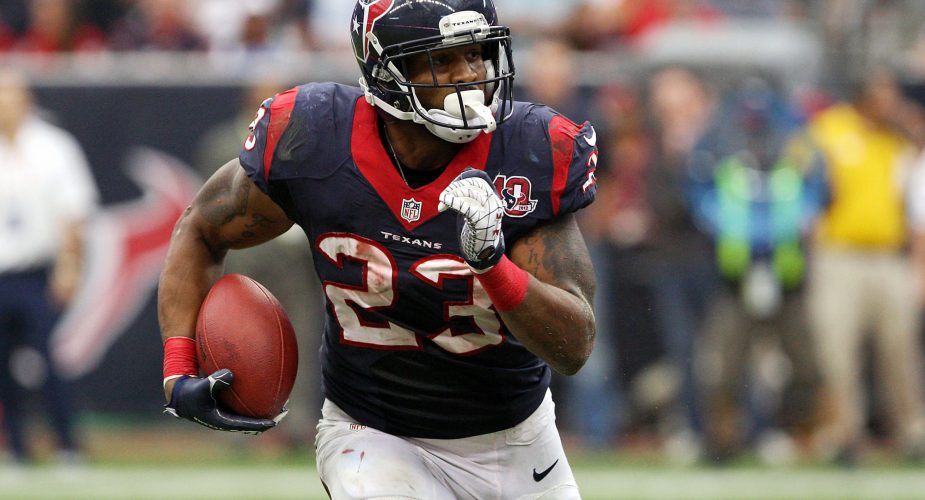 The New York Jets take on the Houston Texans on Monday night and here is our full Jets game preview.  Everyone knows that the Texans are off to a 4 and 0 start, led by QB Matt Schaub.  Here are a few Houston players to keep your eye on during the game:

1. #23 RB Arian Foster– Foster is Houston’s biggest weapon. He’s rushed for 380 yards (3.7 average) this year and has caught 9 balls for 44 yards. He is an explosive running back that can make something out of nothing. His excellent field vision and awareness make it tough to get a good hit on him. Foster’s ability to cut back against the grain makes him an extremely dangerous opponent this week. The Jets will need to sure up their interior defensive line if they have any chance to stop Foster.

2. #99 DE J.J. Watt– J.J. “Swat” as he is now known around the league, leads all defensive ends in batted passes with 5. He has a high motor and a knack for getting to the quarterback. He already has 7.5 sacks on the season. With Sanchez being short in stature and having a low release, Watt can have a field day batting down passes this week. The Jets need to know where he is lined up on all plays to make sure this doesn’t happen. It’s hard to say who he will be lined up against because the Texans have so many pass rushing weapons, they may move Watt all over the line until he finds a weak spot to exploit.

3. #83 WR Kevin Walter– Andre Johnson is Andre Johnson. He’s going to get his catches, even with Cromartie on him. The guy that poses the biggest threat to the Jets, especially on third down is Kevin Walter. Walter only has 9 receptions on the year so far but he averages over 14 yards per catch. He will most likely be lined up against Kyle Wilson, which could make Walters, Matt Schaub’s go-to receiver this Monday night. Wilson was beat badly against the 49ers but most were incomplete. Schaub is a better quarterback than Alex Smith and he won’t miss those opportunities. Watch for Walters to have a Welker-like night on Monday night. If the Jets can hold him down, as well as, Andre Johnson and Owen Daniels, the defense will at least have the team in a position to win this ball game.