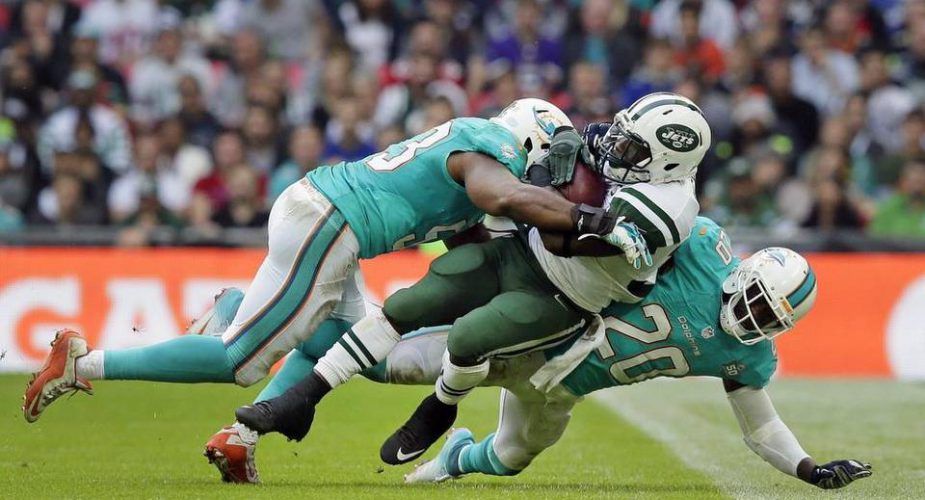 The Jets “visited” the Miami Dolphins in London this week, kicking off at about 9:30 AM. The flight to London and the time change, which were big topics of conversation during the week, didn’t affect the Jets much. They posted a dominant 27-14 win over their division rival at Wembley Stadium.

The Dolphins opened the game on offense and was sent off by the Jets defense after a relatively short drive that stalled early.

The Jets opened the game with a bang, a 58 yard completion from quarterback Ryan Fitzpatrick to receiver Brandon Marshall, not letting the “narrative dictate the playbook” as CBS play by play caller Ian Eagle informed us. Running back Chris Ivory, who didn’t play last week due to injury, burst through on the next play behind a good offensive line blocking for a first down, and then into the endzone for the touchdown on the next.

The Jets defense made relatively short work of the Dolphins offense again, and the Jets next drive really should have been a touchdown, but they settled for a field goal.

The Jets first drive that didn’t end in a score was their third. It ended with a strange attempt on 4th and inches where the strategy seemed to be Fitzpatrick trying to draw the Dolphins offsides. But they scored another field goal on the next drive, which included a great grab by receiver Eric Decker.

On two ridiculous pass interference calls against the Jets secondary, Darelle Revis and Marcus Gilchrist respectively, the Dolphins were allowed to remain in the game with a touchdown, making the score 13-7 with about 5 minutes left in the third.

It looked like the Jets offense was descending into disarray by the end of the half, but Fitzpatrick, who was leading the descent with passes that weren’t in the same area code of his receivers, pulled it together in the last two minutes to take the Jets down the field for another touchdown at the end of the half, extending New York’s lead to 20-7.

The Jets opened the second half like they opened the first: with a touchdown drive. After Fitzpatrick extended the drive with a scramble of his own, Ivory did most of the rest of the work. Running back Zac Stacy punched the ball in for the touchdown.

Nick Folk missed a 41 yard field goal in perfect conditions on the Jets next drive, and nobody thought it was going to matter much, but it was looming large with about seven minutes left in the game, when Miami had already managed another touchdown and was driving for another.

After more questionable calls, the Jets defense kept the Dolphins out of the endzone, even with eight downs for Miami to get the ball in. Revis picked off the final attempt off on fourth down, and Jets fans heaved a sigh of relief.

There was another scary moment in the next few plays where it looked like maybe Ivory had fumbled, but the call was reversed and he was ruled down.

Miami got another chance for another score, but Marcus Williams managed to pick the ball off, and the Jets were able to kneel and secure the win.

After a game that the Jets more or less dominated, the fourth quarter got a bit scary between penalties against the Jets and poor punt coverage. On the other hand, the defense was able to make a number of stands and good plays that kept the Jets from embarrassing themselves on an international stage.

There were a few injury scares as well. Safety Calvin Pryor left the game with a knee injury and David Harris with a quad injury during the same Miami drive. Rookie defensive lineman Leonard Williams left with a left leg injury. The extent of these injuries are unknown at this time, but early reports didn’t make them sound too serious.

After a hot start, Ryan Fitzpatrick had some shaky spots but played well enough to win. He was 16/29 for 218 yards with one touchdown and one interception for a 76.5 rating. He also scrambled for 34 yards.

Chris Ivory led the Jets and the entire Dolphins offense with 166 rushing yards on 22 carries with one touchdown.

Brandon Marshall led all receivers with seven catches for 128 yards. Eric Decker had 46 reception yards and a touchdown.

The Jets have a bye next week. They return to the field on October 18 vs. the Washington Redskins. Kickoff is at 1:00 PM.

By Kristine Gammer
Posted on October 4, 2015