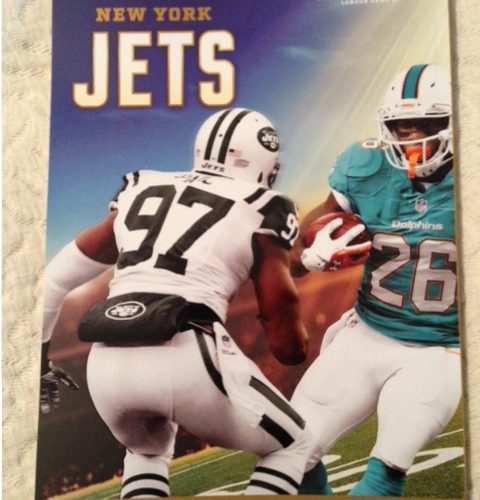 At 1 p.m. Sunday, the New York Jets (5-5) will look to right the ship against division foe Miami Dolphins (4-6).The Jets, losers of four of their last five, need a strong finish to make the playoffs.

The Jets clearly aren’t playing good football, but Miami isn’t lighting the world on fire either. The Dolphins, who fired coach Joe Philbin after losing week four to New York, looked like they were going to maybe turn things around but have dropped three of their last four. They lost to the Dallas Cowboys 24-14 last week.

This is a big game for both teams. The winner will at least feel like they have a chance to still make the playoffs. The loser would need a big turnaround to make that happen. Let’s take a look at the matchup:

Getting to know Miami

A lot has changed since the Jets beat Miami 27-14 week four in London. The Dolphins immediately fired their coach after that loss, then demolished the Titans and Texans for two straight wins. to get back to .500.

Miami has come back down to earth since. They were humbled by New England, crushed again by Buffalo, scored 20 unanswered to barely beat Philadelphia and lost last week to Dallas. despite the defense forcing two turnovers, the Dolphins offense was a mess again, combining for just 210 total yards of offense.

The Dolphins have what we like to call an “identity problem”. What are they? Can quarterback Ryan tannehill beat you? Do they want to run 40 times a game with Lamar Miller? Can they get to the quarterback on defense? These things change from possession to possession.

That doesn’t mean the Jets should be taking Miami lightly. New York is playing awful football itself. And yes, cornerback Darrelle Revis had the worst game of his life last week, but him being out (concussion) against wide receiver Jarvis Landry is a big blow to the Jets. Landry is probably the team’s best player.

Last week’s gameplan against Houston flat out stunk — again. The Jets got no pressure on T.J Yates, couldn’t contain the only guy that could beat you offensively (DeAndre Hopkins) and rarely doubled JJ Watt, the best player in the NFL.

Ironically, the Jets gameplan this week should follow the same suit of what SHOULD have been last week. New York should blitz the hell out of Tannehill, double Jarvis Landry and make someone else beat you.

Dolphins defensive end Cameron Wake (torn Achilles) is out for the year, so the Jets really have to focus a lot of their efforts on defensive tackle Ndamukong Suh. Suh isn’t having an all-pro year, but he was paid the big bucks for a reason — he can be the best player on the field whenever he wants to be. The interior of the Jets offensive line, especially if center Nick Mangold (hand, knee) can’t play, will have to double Suh all game and take his will to win. The Dolphins seem like a team to get easily demoralized.

For whatever reason, the Jets offense stinks again. Quarterback Ryan Fitzpatrick has regressed from his hot start, but he’s getting no help from the rest of the unit.

Losing four of five is going to raise questions about who the quarterback should be, but head coach Todd Bowles doubled down on his faith in Fitzpatrick. Fitz wasn’t great last week — he was 19 of 39 for 216 yards and turned the ball over twice — but was killed by drops. Take last week for example: Down 24-10 with the third quarter winding down, rookie speedster Devin Smith dropped a perfect deep pass that was a sure touchdown. The Jets have to clean up things like that.

It also doesn’t help that for whatever reason, the offense can’t run the ball anymore. Maybe the injury to Willie Colon is looming larger than expected or Chris Ivory is more injured than they’re leading on, but that controlling the clock was the strength of this team. Fitzpatrick has played on six different teams in his NFL career. There’s a reason for that. His teammates need to pick him up.

The Jets are sitting at 5-5, just a hair outside of the AFC playoff picture. A loss would put them at 5-6. That’s not to say New York couldn’t reel off five in a row, finish 10-6, and make the playoffs, but it seems unlikely.

To play it safe, the Jets should really consider winning. Get to the quarterback, force some turnovers, execute the offense and leave MetLife with a W. Easy enough, right? I guess we’ll find out.