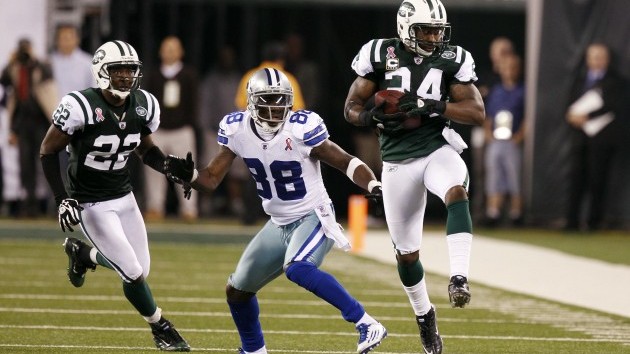 It was another win that was absolutely disgusting, but it was a win. The Jets won an ugly game over the Dallas Cowboys, 19-16, keeping their playoff hopes alive while snuffing Dallas’s.

The Jets defense came out a little shaky, allowing a field goal on the opening drive. When the offense then went three and out on their opening sequence, a Ryan Quigley 25 yard punt, Dallas looked primed to score again, but Dallas quarterback Matt Cassel didn’t throw the ball away, and Darrelle Revis intercepted it.

The Jets offense then came down the field but were stopped in the red zone, failing to convert with Chris Ivory on fourth down. But the Dallas offense, without Tony Romo for the season, again went three and out, and after the defense just missed a safety, the Jets offense started with excellent field possession.

Mid-drive, Decker was hurt on but didn’t fumble the football as originally thought, and Dallas wasted a timeout challenging the call. Brandon Marshall made a big catch, and Bilal Powell exploded through a hole for the touchdown. Randy Bullock missed the extra point, but the Jets led 6-3.

The Cowboys switched quarterbacks in the second quarter. Kellen Moore was picked off by Marcus Gilchrist on his second NFL throw and the Jets took a 9-3 lead on a field goal.

The Cowboys went ahead on a drive that included a terrible penalty call on Calvin Pace. Pace was called for a horse collar tackle with his hand nowhere near the inside of the jersey. Dez Bryant scored the touchdown. Because of the missed point, it was 10-9 instead of 10-10.

With a 1:17 to play, the Jets came down the field and managed to get into field goal range, and Bullock nailed the 40 yard field goal, but the special teams, a dumpster fire all season, was called for an illegal shift. It was a weak call, but Bullock missed the 45 yard field goal, and the Jets trailed at the half, 10-9.

The teams traded possession to start the second half, and with the Jets defense melting down in the third quarter, someone had to make a play. Calvin Pryor did, picking off Moore in the end zone…which was immediately followed by Ryan Fitzpatrick throwing his first interception in four games, leading to another Dallas field goal.

It wasn’t a spectacular half for either team, but the Jets offense finally broke through in the fourth. After coming down the field, Fitzpatrick connected with Decker to take a 16-13 lead.

But Ryan Fitzpatrick had one last drive left in him. With a little under two minutes to go, he led the Jets down the field, with one play to Kenbrell Thompkins for 43 yards, which put the Jets in field goal range. Bullock nailed it a few plays later, giving the Jets the 19-16 lead with 36 seconds to play.

Ryan Fitzpatrick’s final line on the day was 26/39 for 299 yards with one touchdown and one interception an 87.4 rating.

Chris Ivory led the Jets’ rushers with 13 carries for 37 yards. Powell had six rushes for 25 yards and a touchdown.

Brandon Marshall led all receivers with four receptions for 74 yards. Decker followed with six receptions for 55 yards and one touchdown. With Decker’s score, he and Marshall have a combined 21 touchdowns for the Jets this season, which is the most by any duo in franchise history.

Damon Harrison led the defense with eight tackles, which played a significant chunk of the game without David Harris and Muhammad Wilkerson. Demario Davis followed with six. Leonard Williams and Sheldon Richardson combined for a sack. Calvin Pace also had a sack. Marcus Gilchrist, Darrelle Revis, Calvin Pryor, and Marcus Williams all had interceptions.

Next weekend the Jets play New England at MetLife, which is easily the biggest game they’ve played since 2010. Kickoff is at 1:00.