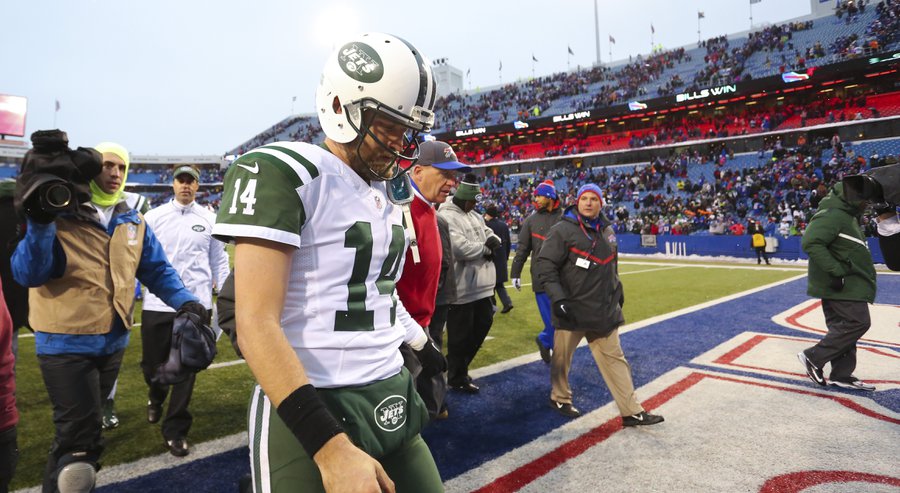 It’s the kind of scenario you see in movies: if the New York Jets win their week 17 game, they’re in the playoffs for the first time since 2010. Standing in their way is division rival Buffalo Bills and former Jets head coach Rex Ryan.

But the Jets didn’t get the movie ending. They got the ending that is much more familiar –  a 22-17 loss, a 10-6 season, and being outside of the playoffs, looking in.

Buffalo also scored on their next drive, with the help of a personal foul on the usually cool Leonard Williams, and the rest of the Jets’ defense looking tired and not tackling well. They lead 13-0 after Dan Carpenter missed the extra point.

The Jets looked like they were finally going to break through in the second quarter after Chris Ivory, previously underutilized, had a 58 yard run, but kicker Randy Bullock missed the field goal.

When the Jets next forced Buffalo to punt, they benefited from an unsportsmanlike conduct penalty on Buffalo. The scoring drive was quick. Ryan Fitzpatrick finally hit Brandon Marshall for a 40 yard gain, and then again for the touchdown, and Buffalo led 13-7.

Any momentum gained by the Jets offense was then lost by the Jets defense, who allowed a 9 minute drive that ended in a field goal. Sheldon Richardson personally allowed the drive to extended when he was drawn into a neutral zone infraction when the Bills brought in EJ Manuel on fourth down. At halftime, the Jets trailed 16-7.

The Jets managed a field goal after Damon Harrison forced a fumble in Bills territory to start the second half, the and the lead was cut to 16-10.

Buffalo padded their lead with another field goal, going ahead 19-10. The Jets offense finally put it together with a drive that featured Marshall, Ivory and Eric Decker.  The Jets pulled within 19-17, with Decker catching the touchdown pass.

It looked like the Jets were going to take the lead on their next drive, but Fitzpatrick was picked off in the end zone by Leodis McKelvin. Then the Jets defense couldn’t get off the field on third down, and the Bills extended their lead with another field goal to 22-17.

It took until there was 17 seconds left, but the magic the Jets created all December fizzled, and the Jets season ended on Fitzpatrick’s third interception of the game, with Gang Green missing the playoffs for the fifth year in a row.

The game was brutal even if the Jets had won, as defensive lineman Muhammad Wilkerson left the game with what turned out to be a broken leg that will probably require surgery, and didn’t return. The heart of the defensive line, Wilkerson is in a contract year and was negotiating with the team last offseason about an extension.

Ryan Fitzpatrick’s final line on the day was 16/37 for 181 yards, two touchdowns, and three interceptions for a 42.7 rating.

And so the Jets will begin the messy work of the offseason.

Although the season ended in disappointment for Jets fans, there is a lot to look forward to in terms of offensive production from Marshall and Decker. In one season, they’ve become one of the most dynamic receiving combinations the Jets have ever had, each with over 1000 receiving yards and ten touchdowns.

As previously mentioned Mo Wilkerson is in a contract year, so it’s unclear what will happen with him.

The special teams needs help. Jeremy Kerley cannot continue being the punt returner because he never returns anything, and how Ryan Quigley is still on the team after being terrible week in and week out is one of the bigger mysteries of the Jets universe.

The good news is that Mike Maccagnan seems to be a much better evaluator of talent than his two immediate predecessors, and Todd Bowles has shown a good ability to learning and adapting to the rest of the NFL. The honeymoon is over, but there’s no reason to believe things won’t continue looking up.

The Jets won’t play another game that counts until September but we we be in our NY Jets forum discussing the team all offseason.

By Kristine Gammer
Posted on January 3, 2016