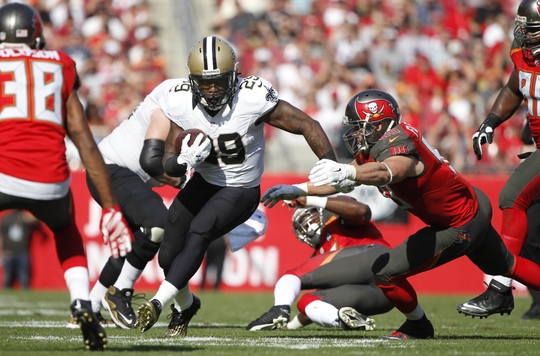 Heading in to the off-season with just one running back on the roster (Zac Stacy), the Jets were obviously going to have some work to do in re-stocking their depth chart, and they’ve wasted no time in doing so. Gang Green came to terms on a deal with running back Matt Forte less than 24 hours ago, and multiple reports have the Jets bringing back fan favorite Bilal Powell and a newcomer in former Saints running back Khiry Robinson.

Robinson is a 6′ 200 lb back out of West Texas A&M. He has had limited reps as a pro after being buried on the New Orleans Saints depth chart. That story sounds very familiar to the situation Chris Ivory was in before he was traded to the Jets.

In 28 pro games, only three of them starts, Robinson has been an effective runner, carrying the ball 186 times for 766 yards (4.1 YPC) and 8 touchdowns.

Robinson broke his tibia last year in November. He had 180 yards rushing on 56 carries and 4 TDs. #nyj

Be sure to check out our NY Jets Forum for all the latest Jets news.