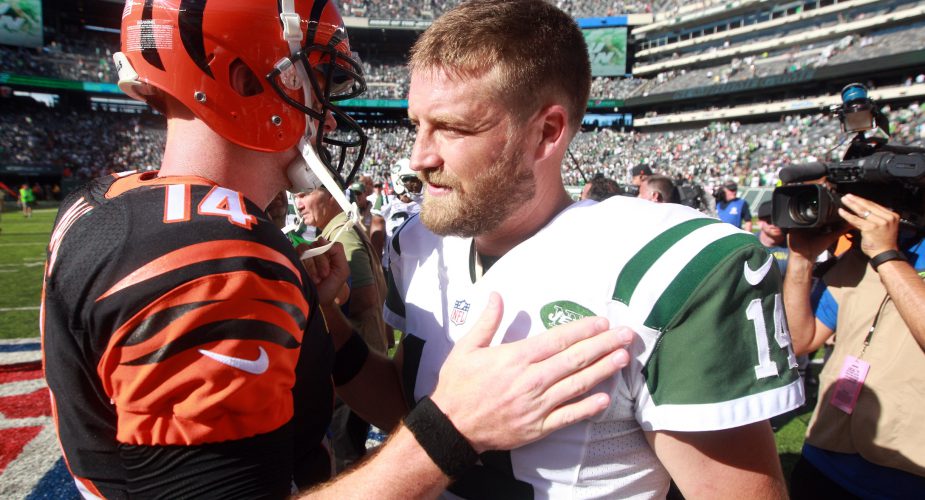 Incredibly frustrating game to lose because the Jets dominated a good CIN team in the trenches on both sides of the ball.  Fantastic atmosphere generated by the crowd.

– The worst game ever for Nick Folk since he’s been here.  Missing a 22 yard FG and a PAT is inexcusable.

– Lachlan Edwards was terrific and the coverage units were air tight particuarly against a big time returner like Adam Jones.

– Jalin Marshall was solid in his punt returns and had a spectacular kick return that set up a TD.

– Awful production in the red zone, you can’t go 2 for 5 and expect to win.  Especially when Folk leaves 4 easy points on the field.

– OLine was excellent across the board in both run blocking and pass protection.  They really took Geno Atkins out of the game.

– CIN did a good job taking away Brandon Marshall & Eric Decker.  But you have to be encouraged by the production of our secondary options.  Quincy Enunwa, Matt Forte and Bilal Powell were excellent and basically carried the offense.

– Speaking of Forte you saw today exactly what he brings to an offense.  Smooth running and hands out of the backfield like a WR.

– Tremendous improvement across the board in Enunwa’s game.  Many of the catches he made today he wouldn’t have last year.

– Sub-par games across the board for Ryan Fitzpatrick, Marshall and Decker.  Too many missed connections and Marshall’s drop on the final drive of the game was a crusher.

– Unbelievable game by the DLine, shades of the “Sack Exchange” with SEVEN sacks.  Particularly beastly were Leonard Williams and Steve McLendon who both had “Canton” games.

– Awful job by the secondary today, other than the INT by Marcus Williams they contributed to the loss as much as Folk.  When your DLine generates seven sacks you can’t bust coverages and give up big plays. AJ Green is a premier WR but you can’t get beat by Lafell and Uzomah, that’s inexcusable.  Particularly bad were Marcus Gilchrist and Williams.

– The defensive staff needed to adjust to CIN “dink & dunk” WR screen game sooner than they did.  Also that gimmick “spread OLine” CIN used was so annoying.

For more information on the game be sure to check out the post game stats.