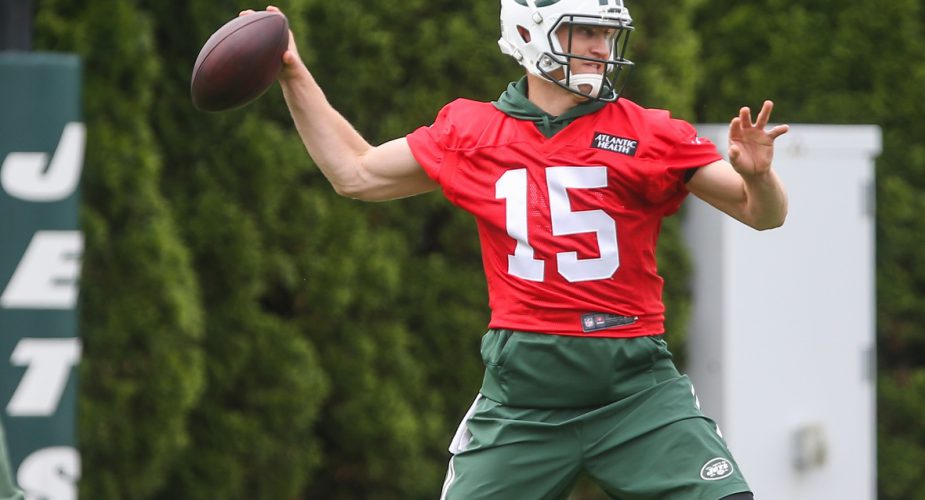 The quarterback competition is now in its second week at OTAs between Josh McCown, Christian Hackenberg, and Bryce Petty. All three are at completely different points in their respective careers and it seems as if all three have a fair chance to earn the #1 spot on the depth chart.

Josh McCown
According to several Jets beat reporters, Josh McCown has been getting first-team reps and has looked good doing it. McCown is the likely favorite to win the job for week 1.

Jets QB Josh McCown is getting the first-team reps and looks sharp. Christian Hackenberg, almost picked off on… https://t.co/eY8PtpiFtd

Christian Hackenberg
Todd Bowles stated, “For it being the fourth practice, he’s coming along pretty good. He’s getting a grasp of the offense and learning it. With 11 guys out there for the first time, there are going to be mistakes on both sides of the ball but he’s coming along.”

We all knew Hackenberg was going to be a project when the Jets drafted him in the 2nd round of the 2016 NFL Draft, but this statement from Coach Bowles bodes well for him. Being that Bowles refused to even give Hackenberg a look in a meaningless week 17 game to end the season, any praise his way helps his case. Things have been up and down for Hackenberg so far during OTAs, but it seems as if he’s showing enough improvement to remain in competition with McCown. I personally still believe McCown will win the week 1 job, but Hackenberg is going to take over in week 5 at Cleveland so we can see what we have in him before the supposedly stacked 2018 QB class.

Bryce Petty
First off, happy birthday to Bryce, who just turned 26 today. However, this just means he’s getting older and still has very little experience playing in this league. The experience he does have was not very impressive either. According to the New York Post, Petty seems to be all about competing and does not feel like a #3 QB. Petty stated, “I don’t feel like No. 3. I don’t think Hack feels like he’s No. 3. I don’t think Josh feels like he’s No. 3, or any of the above. We’re just trying to get better as a unit and as a group to get to where we want to be in the season. I don’t read headlines. I don’t do stuff like that. I’m just focused on coming in here and being better every day.” Personally, I believe Bryce will either end up the #3, on the practice squad, or with another team (or no team) come week 1. However, with the Jets giving each QB a fair share of reps, Petty needs to continue to compete and show improvement if he wants to stay in this race.